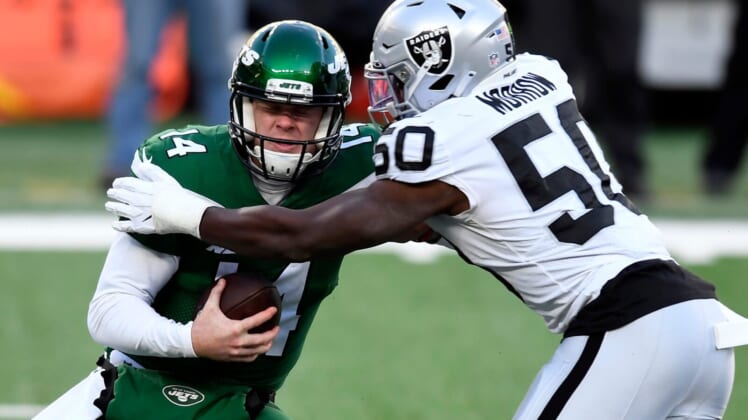 The Las Vegas Raiders are getting closer and closer to the start of the regular season with every passing day. Week 1 is just around the corner and the Raiders are ready to gear up for a long season.

Excitement is growing as the defense looks to be coming together despite a few injuries. With the popular thinking being that the team has had a playoff-caliber offense but a weak defense over the last few years, expectations are getting higher.

Before they play games that matter, the Raiders have one more preseason game against the San Francisco 49ers. It will be the last chance for bubble players to prove themselves and the first chance for the everyday starters to see the field.

Perryman brought in as reinforcement for thin linebacking group

The linebacker position group was already one of the Raiders thinnest and now it’s been hit hard by injuries. Nicholas Morrow and Javin White have both gone down recently with injuries that are going to hold them out of action for a bit.

“They’re both going to be out for a while,” said coach Jon Gruden. “We’re concerned about having them available.”

The Raiders traded a 2022 6th round pick for Denzel Perryman and a 2022 7th round pick. Perryman is another body at the linebacker position who has a history with defensive coordinator Gus Bradley.

With Cory Littleton looking to have a bounce back season. and Nick Kwiatkoski expected to be ready to go soon, the depth chart isn’t completely barren for the Raiders. However, Perryman was an addition that will help ease minds, especially considering his history with Bradley’s system.

While the Raiders would love to ease their young players into the lineup, they can’t afford to do that considering their depth. Despite the pressure that rests on the shoulder of some of these inexperienced players, early signs from camp have been encouraging for many.

Nate Hobbs has been the star of the preseason and his efforts have not gone unnoticed. From big plays against the Los Angeles Rams to impressive reps in practice, he has everyone around the team excited.

“He’s going to be, I think, a really good player for us,” Carr said. “Hopefully a great one, that’d be good for us.”

While Hobbs has been getting much of the attention, other rookies such as Alex Leatherwood and Malcolm Koonce have also made big plays and will see snaps once the regular season begins.

Gruden will have more chess pieces than ever this year to play with on offense. It starts with Darren Waller, who is one of the best receiving tight ends in the league and is too fast for linebackers while also being too big for defensive backs.

However, the weapons go beyond just Waller. Henry Ruggs III has gotten to experience his first normal offseason and can be used as a receiver as well as a rusher because of his burning speed. Free agent acquisition Kenyan Drake is another dual-threat player that can line up at multiple spots.

Starting running back Josh Jacobs has also taken major steps as a pass catcher and it hasn’t gone unnoticed.

“He’s doing a really good job and he’s working hard at it,” Gruden said. “Before the Rams games he’s sitting there running all the tight end routes.”

The Raiders will face off against the San Francisco 49ers on Sunday in their final preseason game. It’s their last chance to work out any issues before they host the Baltimore Ravens in Week 1.

It will be the first chance for Derek Carr and the starters to take the field together and get some game-action reps. Despite not getting into any games so far, Carr made it clear that the joint practices helped.

“I think I get more out of that [the joint practices] than a preseason game because no one really shows anything,” Carr said.