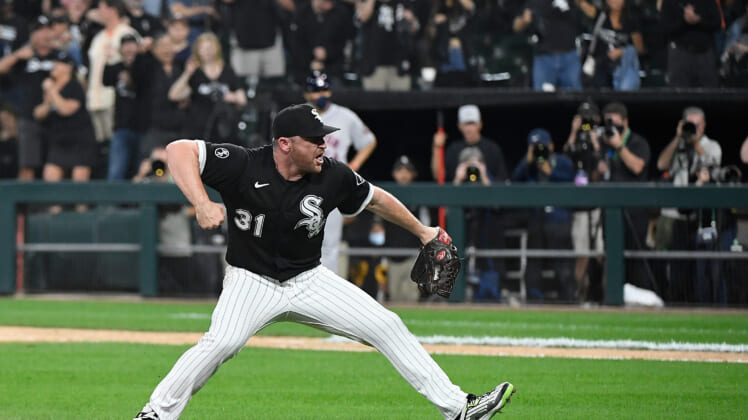 Inclement weather forced Monday’s Game 4 of the American League Division Series between the Houston Astros and White Sox in Chicago to be postponed.

Heavy rain and risk of severe weather led MLB to move the game back one day to Tuesday afternoon. Houston leads the best-of-five series 2-1.

An extra day off in the series could be significant for the White Sox, who are planning to start left-hander Carlos Rodon despite lingering uncertainty about his shoulder. Rodon has pitched once in the past three weeks and his average fastball velocity was down from 95.5 mph to 90.5 in that outing.

The White Sox avoided a three-game sweep with a win Sunday night in the first home game of the series for Chicago.

Winning Tuesday would force a Game 5 Wednesday in Houston, the outcome of which already is destined, as White Sox closer Liam Hendriks sees it.

“We came in as an inexperienced team that hadn’t had the playoffs in front of fans before,” said Hendriks, who recorded the final three outs Sunday. “This is obviously a huge one to get that first one out of the way. And then we can run with it a little bit. Now we’ve got the momentum on our side and hopefully we can win out here tomorrow and finish it in five. Sox in five.”