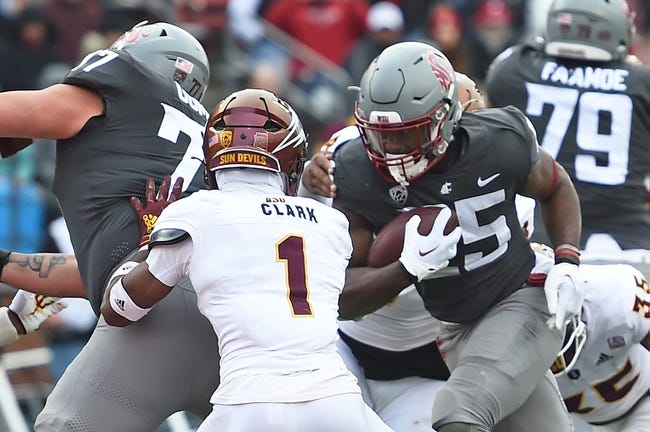 Nakia Watson rushed for 116 yards and three touchdowns, and host Washington State’s defense smothered Arizona State until late in the game in its 28-18 win Saturday in Pullman, Wash.

Washington State quarterback Cam Ward completed 22 of 37 passes for 219 yards and one touchdown. The Cougars amassed 356 total yards to 333 for the Sun Devils, who didn’t reach triple digits until the midpoint of the third quarter.

Xazavian Valladay ran for 134 yards and a touchdown on 21 carries, but Arizona State (3-7, 2-5) had little passing to help him out until it was too late.

Quarterback Trenton Bourguet, who was making his third start after taking over for Emory Jones, completed just 3 of 10 passes for 26 yards, often under heavy pressure. Bourguet left with a leg injury late in the second quarter and was replaced by Jones, who went 15-of-23 passing for 186 yards and two touchdowns.

It was Valladay’s sixth 100-yard effort this season and the 20th of his career in 49 games. He added another 55 yards on six catches.

The Cougars took a lopsided 28-0 lead into halftime, but the Sun Devils tried to make it a game late in the third quarter. Jones connected with Jaylin Conyers for a 47-yard pass play to break the shutout with 51 seconds left in the quarter.

About midway through the fourth, Jones missed an open receiver in the end zone on fourth-and-goal from the 7, but Valladay capped a four-play drive with a 1-yard touchdown run with 4:10 left to play to make it 28-12.

The Sun Devils capitalized when the Cougars failed to convert a fourth-and-1 with just over two minutes left at the Arizona State 37. A 35-yard pass to Valladay set up a 9-yard scoring toss to Elijhah Badger to make it a 28-18 game.

Watson had a 22-yard burst late in the second quarter to set up his third touchdown, a career high, and the Cougars’ fourth of the day. He capped the 13-play, 75-yard drive with a 2-yard run, and Dean Janikowski’s second extra point made it 28-0.

Earlier, Watson scored from 2 yards out with 6:31 left in the first quarter, and again on a 5-yard rush with 7:43 left in the second. In between, Ward underhanded a pass, barely more than a handoff, to receiver Leyton Smithson as he went by on a sweep for a 2-yard score late in the first.