Zack Wheeler tossed a complete game two-hit shutout against his former team as the Philadelphia Phillies defeated the New York Mets 3-0 on Sunday.

Wheeler (10-6) continued to make a strong case for the National League Cy Young Award. He walked one and struck out 11, his sixth time this season striking out at least 10.

Jean Segura, J.T. Realmuto and Bryce Harper each homered for the red-hot Phillies, who have won a season-best eight in a row.

The reeling Mets were swept by the Phillies, one series after dropping three of four to the Miami Marlins.

Mets starter Taijuan Walker allowed four hits and three runs in six innings. Walker (7-7) struck out one and walked one.

The Phillies jumped out to a 1-0 lead in the first inning when Segura launched a solo homer to left-center field. Realmuto added an opposite-field solo shot to right for a two-run advantage. 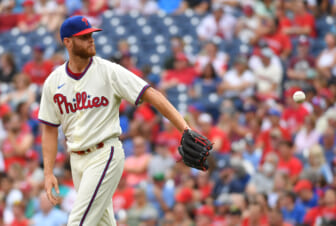 Brandon Nimmo was responsible for both the Mets’ hits: a leadoff double to start the game and a single in the ninth inning.

New York’s Javier Baez left the game in the fifth inning after grounding out to second. Baez never advanced out of the batter’s box and appeared to be in pain. The Mets said Baez had left hip tightness, and he was replaced by J.D. Davis.

Harper hit a solo homer to left with two outs in the sixth for a 3-0 lead. It was Harper’s 20th home run of the season.

Alec Bohm singled with one out in the seventh for the Phillies. But Ronald Torreyes grounded into a double play to end the inning.

After Nimmo’s leadoff double, Wheeler retired 22 batters in a row before Michael Conforto walked in the eighth inning. Jonathan Villar popped up to Bohm at third and James McCann flied out to right.