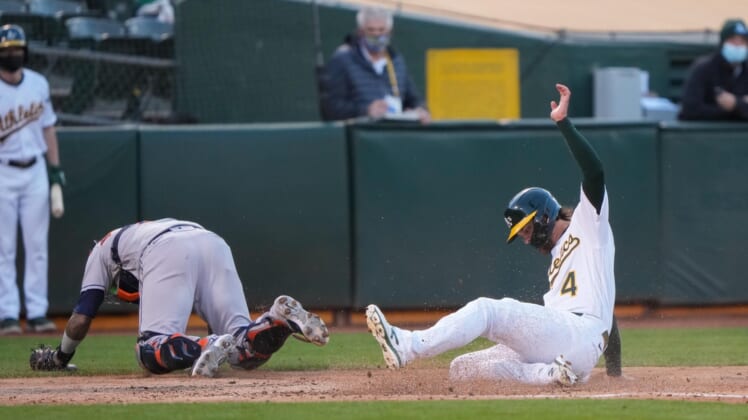 Zack Greinke struck out a season-high eight over eight strong innings and Yuli Gurriel had four hits with four RBIs as the visiting Houston Astros evened their three-game set against the Oakland Athletics with a 8-1 win on Wednesday night.

Michael Brantley and Myles Straw each had three hits, Jose Altuve (two hits) homered to lead off the game and Carlos Correa recorded two RBIs for the Astros, who rapped out 15 hits to win for the seventh time in eight contests.

Oakland was trying for a third consecutive victory after rallying for a 6-5 win on Monday that snapped Houston’s six-game winning streak. However, the A’s had no real answer for Greinke (4-1, 3.77 ERA), who yielded just the one run, four hits and didn’t allow a walk. The veteran right-hander retired 17 of the final 18 batters he faced.

Houston was clinging to a 2-1 lead in the seventh when Gurriel doubled off the left-field wall, scoring two. Correa followed with an RBI single to cap the three-run frame. Gurriel’s second two-run double of the night highlighted a three-run eighth for the Astros.

Houston didn’t waste any time getting to Oakland starter Frankie Montas (5-3, 4.79 ERA), with Altuve pulling the first pitch of the game up into the left-field seats for his fifth homer of the season. The Astros added another run in the first on Correa’s bloop, RBI single to right.

Montas, who had won three straight starts, allowed only those two runs along with seven hits and two walks while striking out six.

Oakland’s only run of the night came in the second, when Sean Murphy delivered a two-out, run-scoring double down the left-field line. That’s all the A’s could muster in this matchup between the AL West Division’s top two clubs.