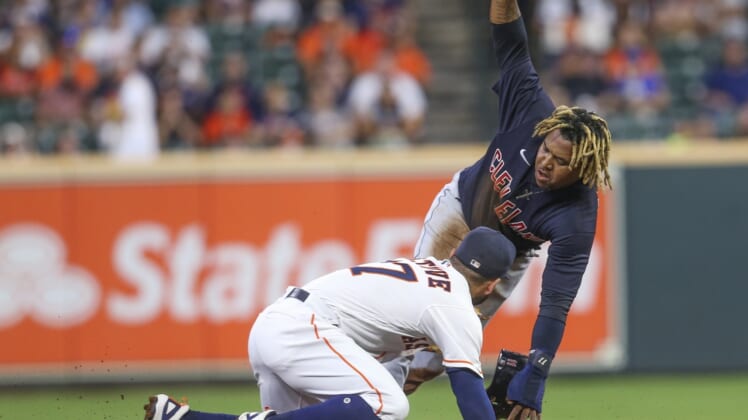 Yordan Alvarez slugged his first home run in nearly two weeks and the Houston Astros rebounded from a lost series in Chicago with a 4-3 win over the Cleveland Indians on Monday.

Alvarez finished 2-for-3 with a double and a walk for his first multi-hit game since he homered twice against the Oakland Athletics on July 6. Over the subsequent eight games, Alvarez went 2-for-30 with zero extra-base hits, zero walks and zero RBIs while posting 15 strikeouts.

His two-run home run with one out in the fifth inning drove in Michael Brantley, who opened the frame with a single off Indians right-hander J.C. Mejia (1-5). Alvarez crushed a 1-0 changeup and deposited it into the upper deck in right field, a 411-foot blast that yielded his 17th homer.

Prior to Alvarez, the Astros struggled to land the decisive blow against Mejia, who produced a career-high eight strikeouts before departing with one out in the fifth. Mejia struck out Carlos Correa and Kyle Tucker to strand a pair of baserunners after Houston grabbed a 1-0 lead in the first, and fanned Correa again to close the third with Brantley and Yuli Gurriel in scoring position.

Mejia did surrender an RBI single to Astros catcher Martin Maldonado in the fourth, a half-inning after Indians slugger Franmil Reyes bashed his 16th homer to left to knot the score at 1-1. Mejia (1-5) allowed four runs on seven hits and two walks over 4 1/3 innings en route to his fifth straight loss.

Reyes added a run-scoring single in the sixth to greet Astros right-hander Cristian Javier, who entered after Astros starter Zack Greinke (9-3) allowed a pair of singles to open the frame. Greinke, coming off an injury-shortened appearance against the New York Yankees on July 10, allowed two runs on five hits and one walk with four strikeouts over 5 1/3 innings.

The Astros, after amassing one run in back-to-back losses to the White Sox, improved to 5-0 against Cleveland this season. The Indians mounted a threat in the eighth when Harold Ramirez plated Jose Ramirez with a single to right and pushed Bobby Bradley to third base.

But Astros reliever Ryne Stanek retired Bradley Zimmer on a called third strike to snuff the rally and closer Ryan Pressly earned his 17th save by working around a leadoff walk in the ninth.