WATCH: Yankees rally past Rangers to move back in wild-card position 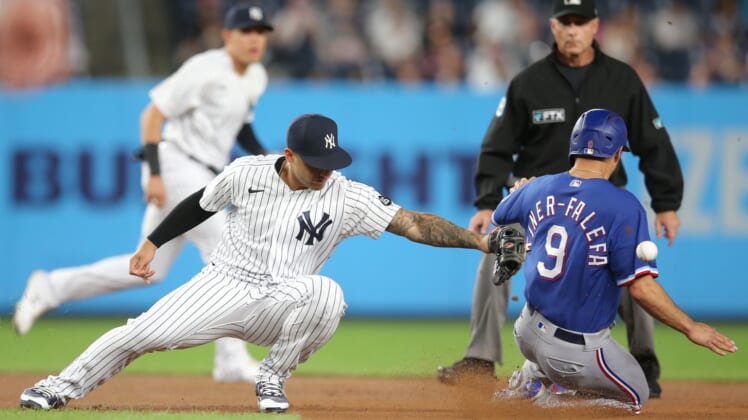 Gleyber Torres hit a tiebreaking double with two outs in the eighth inning, Gary Sanchez hit a long two-run homer later in the inning and the New York Yankees moved back into the American League’s second wild-card spot with a 7-3 victory over the visiting Texas Rangers Wednesday night.

The Yankees (86-67) won their third straight after losing 15 of 22 and moved a half-game ahead of the Toronto Blue Jays for the second wild card. Their lead may be short-lived as Toronto visits Minnesota to open a four-game series Thursday before the Yankees start a three-game series Friday at Fenway Park against the wild card-leading Boston Red Sox.

Gallo started the rally with a bloop double off Spencer Patton (1-2) into no-man’s land in left field as the Rangers were shifted over against their former slugger. On the next pitch, Torres ripped a double down the right field line that went to the fence to easily score Gallo.

One pitch later, Torres gave the Yankees a 5-3 lead when he slid head-first into the plate as second baseman Yonny Hernandez booted an infield single by Gio Urshela. Hernandez was also charged with an error as Torres got his left hand slightly ahead of the tag and the original call by plate umpire Jeremie Rehak was upheld following a replay review.

Three pitches later, Sanchez reached Monument Park beyond the center field fence for his 23rd homer to make it 7-3.

Before New York’s comeback, Kyle Higashioka hit a two-run double in the fifth and Aaron Judge scored the tying run in the sixth on a wild pitch by Dennis Santana.

Kluber, who no-hit the Rangers May 19 in Texas, allowed three runs on eight hits in 4 1/3 innings. He struck out four and walked none before the Yankees used four relievers.

After Wandy Peralta and Clay Holmes followed Kluber, Chad Green (9-7) pitched a scoreless eighth that was aided by Sanchez throwing out Adolis Garcia trying to steal second. Aroldis Chapman finished up in a non-save situation.