Nov 11, 2021; Winnipeg, Manitoba, CAN; Winnipeg Jets forward Jansen Harkins (12) is congratulated by his teammates on his goal against the San Jose Sharks during the second period at Canada Life Centre. Mandatory Credit: Terrence Lee-USA TODAY Sports

Pierre-Luc Dubois had a goal and an assist and Andrew Copp had two assists as the Winnipeg Jets recorded a 4-1 victory over the visiting San Jose Sharks on Thursday.

Down 1-0 midway through the first period, the Jets scored four unanswered goals to improve to 5-1-1 on home ice this season.

Kyle Connor, Nate Schmidt and Jansen Harkins scored for the Jets before Dubois sealed the game with an empty-net score in the final minute.

Andrew Cogliano scored San Jose’s only goal of the game.

Jets goaltender Connor Hellebuyck stopped 26 of 27 shots for his fourth victory of the season.

The Sharks had won the first two games between the teams this season and seemed on track for a third victory after striking early for the opening goal in this one.

At 6:28 of the first period, Brenden Dillon turned the puck over deep in his own end. Brent Burns took Dillon’s giveaway and passed to an open Cogliano in the slot for his second goal of the season. 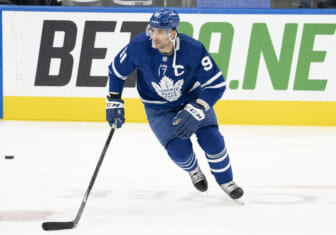 Burns earned an assist on the play, and now has nine points (one goal, eight assists) over the course of a six-game points streak.

The Jets equalized five minutes later, as a nice passing play up the ice resulted in Connor depositing a Dubois rebound past goalie James Reimer. It was Connor’s 10th goal of the season, as the forward continues to sit among the NHL’s early-season scoring leaders.

Schmidt’s blast of a point shot gave Winnipeg the lead at 14:11 of the second period. It was Schmidt’s first goal since being acquired from the Vancouver Canucks in an offseason trade.

Winnipeg struck once more before the second intermission, as Harkins and Adam Lowry combined on a crisp two-on-one in the final minute of play. Lowry threaded a perfect pass to Harkins in front, resulting in Harkins’ second goal.

The Sharks are a perfect 16-for-16 on the penalty kill in their last five games, after holding the Jets scoreless on three power-play attempts. San Jose entered Thursday’s play with the NHL’s second-best penalty-kill percentage for the season.