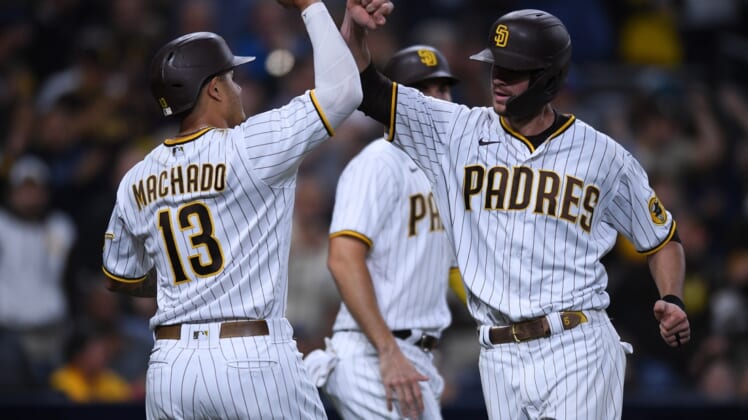 Wil Myers drove in five runs and Manny Machado celebrated his 29th birthday with three hits, including a tiebreaking single, Tuesday night as the San Diego Padres defeated the visiting Washington Nationals 7-4 to even their four-game series at a win apiece.

Myers hit a three-run homer in the fourth and a sacrifice fly in the Padres’ three-run fifth and doubled home Machado in the seventh.

Left-hander Ryan Weathers (4-2) picked up the win for the Padres despite giving up two homers and four runs in 5 1/3 innings. Mark Melancon picked up his major-league-leading 26th save.

Right-hander Erick Fedde (4-5) gave up six runs and eight hits in 4 1/3 innings as he returned from the injured list after missing two starts with an oblique strain.

The game was tied 3-3 going into the bottom of the fifth, on a pair of three-run homers in near-identical situations.

Machado doubled leading off the Padres’ fourth against Fedde and moved to third on Eric Hosmer’s single. Myers followed with his 10th homer of the season, a drive into the seats in right-center.

In the top of the fifth, Starlin Castro got a leadoff single against Weathers and moved to third on a double by Yan Gomes. Josh Harrison then drilled a liner that cleared the wall in center to tie the game at 3-3.

The Padres took control in the bottom of the fifth with a second straight three-run inning.

Trent Grisham led off with a single and moved to second on a one-out walk drawn by Jake Cronenworth. Machado then followed with a sharp single to drive in Grisham to break the 3-3 tie. Left-hander Sam Clay replaced Fedde and gave up a run-scoring single by Hosmer ahead of Myers’ sacrifice fly.

Machado was 3-for-4 with two doubles, three runs scored and the tiebreaking RBI. Myers was 2-for-3 with the homer and a double. The Padres had 14 hits.

Juan Soto hit his 10th homer, in the top of the sixth off Weathers, who gave up four runs on seven hits, with two strikeouts, in 5 1/3 innings.