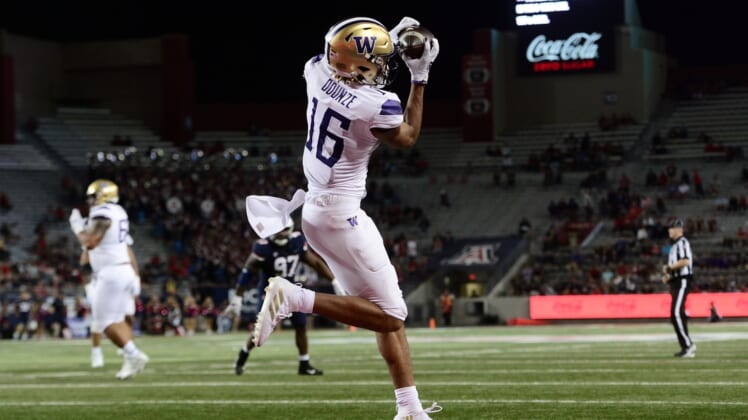 The Wildcats (0-7, 0-4) then went three-and-out and didn’t get the ball back until 21 seconds were left. They went from their 20 to their 40, where a last-second Hail Mary pass was picked off.

Arizona has the nation’s longest losing streak at 19 games.

The Wildcats looked in control early in the fourth quarter, leading 16-7 with a first down at the Washington 28. However, Will Plummer was intercepted by lineman Tuli Letuligasenoa on a short pass into traffic near the line of scrimmage.

Washington ran for just 88 yards, but the passing game was buoyed by big plays from receiver Terrell Bynum, who caught five passes for 143 yards. Morris completed 13 of 21 passes for 217 yards with no interceptions.

Washington cut into its halftime deficit with an 81-yard drive that was capped by a 16-yard touchdown pass to Bynum with 9:41 left in the third quarter. The Wildcats answered with a methodical running game that ate up more than seven minutes in a 15-play drive that ended with Tyler Loop’s 35-yard field goal.

The teams combined for just 41 yards in the first quarter, but an Arizona blocked punt after the first possession led to a 3-0 lead.

In the second quarter, an Arizona 10-play drive ended in Jamarye Joiner’s 1-yard touchdown run on a direct snap. The Wildcats went up 13-0 on Lucas Havrisik’s 50-yard field goal with 2:23 to go before halftime.