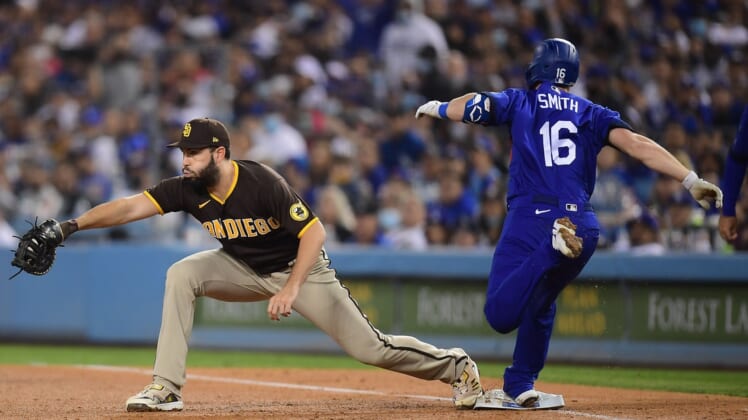 Walker Buehler pitched seven shutout innings and the Los Angeles Dodgers continued their strong play down the stretch drive with a 2-1 victory Tuesday over the visiting San Diego Padres.

Trea Turner and AJ Pollock each drove in runs as the Dodgers (101-56) won for the 13th time in their last 16 games. Turner had three hits.

Los Angeles remained two games behind the National League West-leading San Francisco Giants with five games to play in the Dodgers’ quest for a ninth consecutive division title. The Giants defeated the Arizona Diamondbacks on Tuesday.

Jake Cronenworth hit a home run for the Padres (78-79), while Yu Darvish (8-11) gave up two runs on five hits over four innings in what was expected to be his final start of the season. Eric Hosmer had two hits for San Diego, which was eliminated from playoff contention Saturday and dropped to 6-17 in September.

Buehler (15-4) gave up three hits with two walks and five strikeouts. He was much improved after going 1-2 with a 7.32 ERA over his first four September starts. He failed to go four innings in two of those four outings.

The Dodgers took a 1-0 lead three batters into the game. Mookie Betts led off with a double and Turner brought him home with a one-out double of his own.

The Dodgers made it 2-0 in the third inning when Turner led off with a single and scored on a two-out single from Pollock, who drove in his fourth run in four starts since returning from the injured list last week because of a hamstring issue.

Buehler did not give up a hit through the first four innings before giving up single hits in the fifth, sixth and seventh innings. He recorded his 200th strikeout of the season in the fourth inning when he fanned Fernando Tatis Jr.

Joe Kelly pitched a scoreless eighth inning with two strikeouts for the Dodgers. Blake Treinen gave up Cronenworth’s home run in the ninth before finishing off his seventh save but not before the Padres got the tying run to second base.