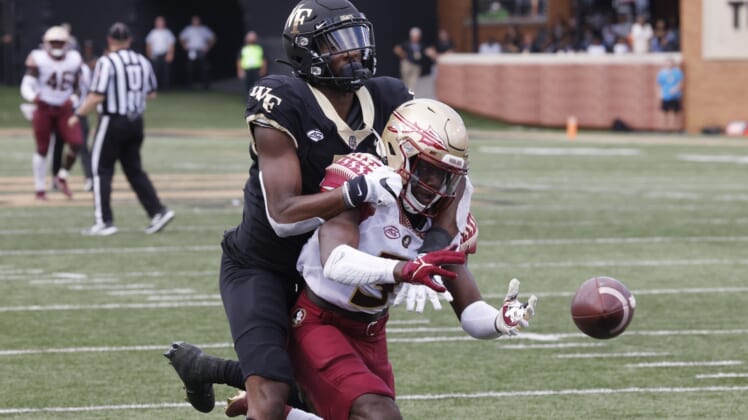 Sam Hartman threw two touchdown passes and Wake Forest handled visiting Florida State 35-14 on Saturday in Winston-Salem, N.C., sending the Seminoles to an 0-3 record for the first time in 45 years.

Hartman completed 22 of 31 passes for 259 yards with an interception in the Atlantic Coast Conference opener for both teams.

Florida State (0-3, 0-1) lost on the final play of home games to Notre Dame and Jacksonville State, but the Seminoles couldn’t keep this one close. They didn’t score in the second half, finishing the game with six turnovers.

Florida State quarterback Jordan Travis threw two touchdown passes and was picked off once in relief of McKenzie Milton, who was intercepted twice. They combined to throw for 226 yards — 119 for Milton, 107 for Travis.

Wake Forest led 24-7 in the second quarter. The Seminoles struck quickly on Travis’ 65-yard pass play to Ontaria Wilson on the first play of the next possession.

The Demon Deacons forced a punt on Florida State’s first possession of the second half, and then padded their lead with Justice Ellison’s 1-yard run and Hartman’s two-point conversion run that capped a 90-yard drive on 14 plays.

The Seminoles then drove 60 yards and stalled at the Wake Forest 11.

By the end, Florida State had 318 yards of total offense compared to Wake Forest’s 484.

Earlier, Hartman hit A.T. Perry for a 49-yard touchdown play to open the scoring. Christian Beal-Smith ran in from 7 yards out to extend the first-quarter margin.