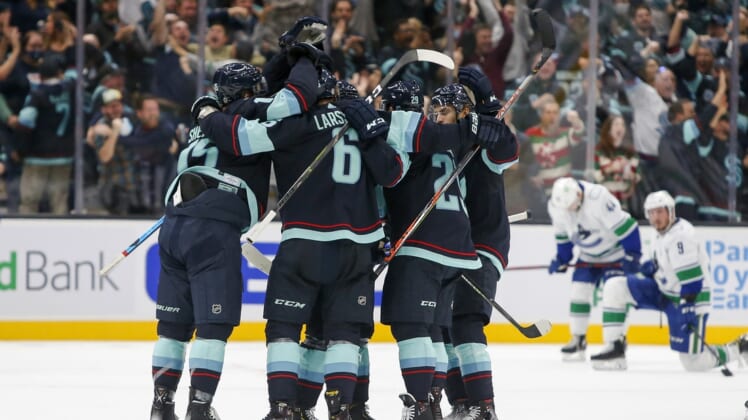 Bo Horvat scored twice for the Canucks, including tying it at 12:52 of the third. Justin Dowling added an empty-netter with 1:00 remaining. Goaltender Thatcher Demko made 29 saves.

Garland’s winner came after the Kraken turned over the puck at Vancouver’s blue line. Garland skated all the way down the right wing and put a wrist shot between Grubauer’s pads.

Horvat tied the score at 2-all with a power-play goal. JT Miller dug the puck out of the corner and fed defenseman Quinn Hughes near the top of the faceoff circles. Hughes’ shot was stopped by Grubauer, but Horvat was able to poke the rebound into an open net.

The Kraken took a 2-1 lead on Giordano’s goal at 5:09 of the third. Jared McCann took a pass from Alex Wennberg and skated over the blue line before sending a pass to Giordano, who had jumped into the play. Giordano’s wrist shot from the left faceoff circle snuck just inside the far post.

Dunn opened the scoring at 19:56 of the first period, taking a pass from fellow defenseman Adam Larsson at the point and skating to the top of the left faceoff circle before putting a shot into the upper right corner of the net.

The Canucks tied it at 1-1 at 11:09 of the second. Giordano, the Kraken captain, attempted to clear the puck up the boards from behind his own net but Garland was able to intercept it near the right point and fed Horvat, who was alone between the top of the faceoff circles. Horvat’s low snap shot found its way between Grubauer’s pads.

Seattle forward Calle Jarnkrok made his season debut after missing the first five games while in the NHL’s COVID-19 protocol.