Rudy Gobert posted his fourth double-double in as many games and the Utah Jazz remained unbeaten with a 122-91 victory over the Houston Rockets on Thursday at Toyota Center.

Gobert paired 16 points with 14 rebounds while logging 28 minutes for Utah, which led by as many as 36 points in the second half.

Bojan Bogdanovic scored 19 points while Donovan Mitchell chipped in 15 points to underscore another balanced attack for the Jazz. Utah placed seven in double figures in points.

Christian Wood scored 16 points and grabbed seven boards for the Rockets, who shot 32.6% overall while missing 35 of 44 3-pointers. Rookie Jalen Green scored 11 of his 13 points in the first half and was alone in double figures for Houston prior to the break. He shot 3 of 16 overall.

Mitchell ignited the methodical extension of the lead for Utah with his three-point play at the 3:45 mark of the first quarter. He answered a 3-pointer from Rockets rookie Alperen Sengun that had pulled Houston to within 19-16 and keyed a 13-2 Jazz rally that closed the opening frame. Joe Ingles (14 points) had five consecutive points during the run, one that continued in the second.

Utah tacked on a 12-2 surge in the second in pushing to a 44-24 advantage. Jordan Clarkson (16 points) started the rally with a 3-pointer and Ingles concluded it with a 3 at the 8:02 mark. In the interim, Eric Paschall followed his three-point play with a 3-pointer to keep the Jazz rolling.

The Rockets, undone by their poor shooting, could do little to stem the tide. While Utah moved to its largest lead of the first half at 54-28, the Rockets were 3 for 18 from behind the arc. Houston managed to shave five points off that deficit by the intermission but closed the half missing 20 of 23 3-pointers. The Jazz and Rockets recorded the same number of shot attempts prior to the break, 42, but Utah finished plus-10 in made baskets en route to a 61-40 lead. 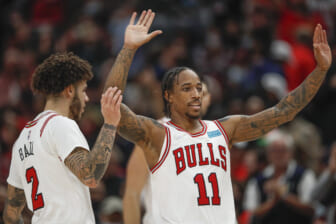