Sebastian Aho recorded two goals and an assist as the visiting Carolina Hurricanes earned a 4-1 victory over the Montreal Canadiens on Thursday.

Andrei Svechnikov and Jesperi Kotkaniemi also scored for the Hurricanes, who improved their record to a perfect 3-0-0. Vincent Trocheck and Teuvo Teravainen each notched two assists.

Aho collected a power-play goal early in the second period, then clinched the Hurricanes’ win on an empty-net score with 39 seconds remaining in the game. Aho has five points (two goals, three assists) over Carolina’s first three games.

For Kotkaniemi, his third-period goal was both his first with the Hurricanes and a full-circle moment in his return to Montreal. Kotkaniemi spent his first three NHL seasons with the Canadiens, but Montreal chose not to match when Carolina signed the forward to a one-year, $6.1 million offer sheet during the offseason.

The Canadiens are now 0-5-0, losing their first five games of a season for the first time since the 1995-96 campaign.

That was all the Canadiens could muster against Frederik Andersen, who looked sharp in his third victory of the season. The Hurricanes goalie stopped 27 of 28 shots, including several big saves late in the third period. 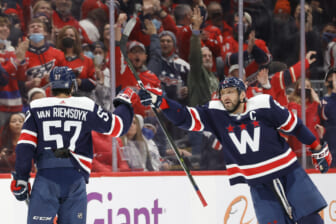 Montreal has been outscored 19-4 over its first five games.

Brendan Gallagher seemingly gave the Canadiens some early momentum with a power-play goal 5:33 into the game, but the tally was reversed after a video review. Officials determined that Gallagher made enough contact with Andersen for it to count as goaltender interference.

Instead, it was the Hurricanes who opened the scoring on the power play. Just 23 seconds into the second period, Teravainen sent a tremendous cross-ice pass to Aho in the circle, and Aho buried the chance for his first goal of the night.

Svechnikov scored less than two minutes later, continuing his red-hot start. Svechnikov already has four goals, and he has scored in each of Carolina’s three games.