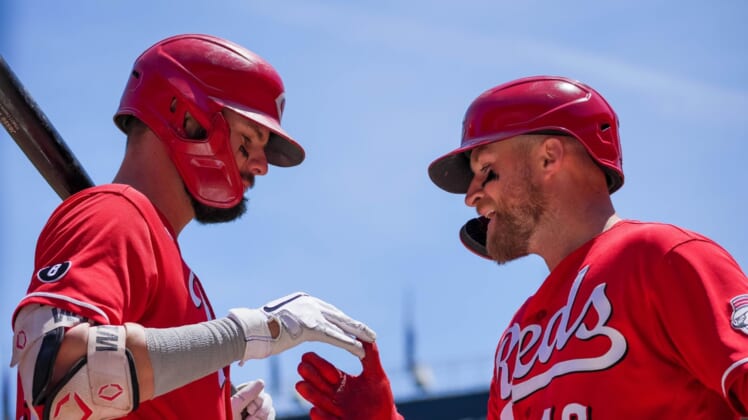 Tyler Naquin went 4-for-4, including a go-ahead three-run home run in the top of the ninth, as the Cincinnati Reds snapped a five-game losing streak with a 10-7 victory over the Minnesota Twins on Tuesday afternoon in Minneapolis.

Naquin drove a 2-1 fastball by Twins reliever Hansel Robles (3-4) 420 feet into the back of bullpen in left-center for his 12th home run of the season. He drove in Nick Castellanos, who had doubled, and Tyler Stephenson, who was hit by a pitch.

Tucker Barnhart went 3-for-4 with a home run and three RBIs and Jesse Winker added a two-run double for Cincinnati. Tejay Antone (2-0), activated from the injured list prior to the game, picked up the win while Amir Garrett garnered his fourth save.

Ryan Jeffers, Max Kepler and Trevor Larnach each homered and Nelson Cruz went 3-for-4 and was also hit by a pitch for Minnesota, which had its season-best five-game winning streak snapped.

Cincinnati took a 1-0 lead in the third inning when Barnhart led off with his fourth home run of the season, a 371-foot drive into the bleachers in right.

Minnesota came back to take a 2-1 lead in the fourth when Jeffers, who caught all 12 innings of the team’s 7-5 victory on Monday, hit his fifth homer of the season, a line drive into the bleachers in left which drove in Cruz.

The Reds regained the lead with three runs in the fifth as Minnesota starter Bailey Ober allowed four consecutive batters to reach base to start the inning. Kyle Farmer led off with a single and advanced to second on a single by Barnhart. Jonathan India then walked to load the bases and Winker followed with a two-run double to right-center that went off the tip of Kepler’s glove and off the wall.

Eugenio Suarez added an RBI single later in the inning to make it 4-2.

Cincinnati extended the lead to 7-2 with three runs off reliever Alex Colome in the eighth, highlighted by a two-run Barnhart single.

But the Twins rallied to tie it, 7-7, in the bottom of the eighth on a two-run homer by Kepler, a 434-foot solo home run by Larnach and a two-run double by Kirilloff off the middle of the scoreboard in right-center.