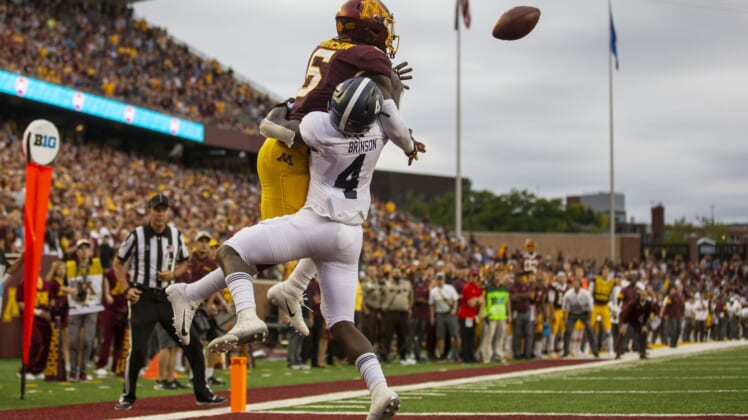 After fellow Minnesota Golden Gophers receiver Rashod Bateman scorched the Penn State Nittany Lions with a 66-yard touchdown to open the game, receiver Tyler Johnson took things to the next level with an absurd one-handed touchdown.

Following Antoine Winfield Jr.’s second interception of the first half, Minnesota’s offense stormed down the field and moved inside Penn State’s 30-yard line. That’s when Tanner Morgan went deep to his go-to receiver and Johnson fought off tight coverage to make the one-handed grab then strolled in for the touchdown.

Penn State entered allowing the second-fewest points per game (9.6) with an excellent pass defense. The Golden Gophers are quickly wiping that all away with 21 points in the first half coming on three touchdown passes by Morgan.

It seems clear that the Nittany Lions don’t have an answer for Minnesota’s receiving corps. Now the Golden Gophers are on their way to a surprising lead as halftime approaches and a shot to upset No. 4 Penn State.