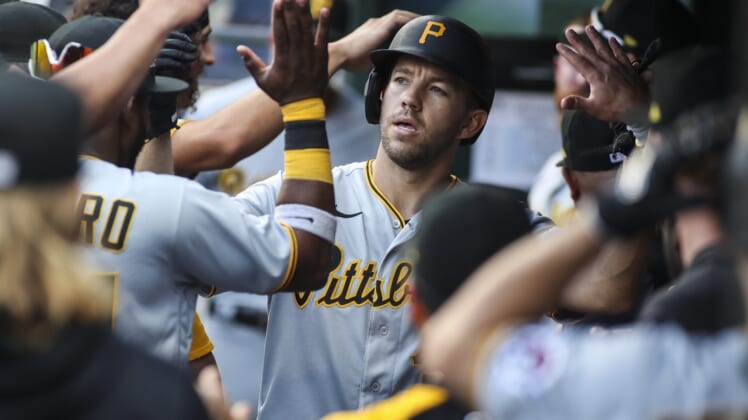 Tyler Anderson did it all for the visiting Pittsburgh Pirates Saturday afternoon, when he tossed five solid innings and hit the go-ahead homer in the Pirates’ 6-2 win over the New York Mets in the opener of a doubleheader.

The Pirates won for the fourth time in six games after dropping six in a row, while the Mets, playing their major league-leading 10th doubleheader, lost for only the third time in their past eight games.

Anderson (5-8) looked as if he might be on the losing end of a pitchers’ duel when he gave up three hits in the first – including an RBI single to Kevin Pillar – and the Mets’ Marcus Stroman retired the first nine batters he faced on just 29 pitches. But Adam Frazier led off the fourth with a single and went to third on a one-out single by Bryan Reynolds before the red-hot John Nogowski laced a two-run double.

Jonathan Villar tied the score with a solo homer – his third in the past two games – in the fourth before Anderson homered well beyond the right field fence with two outs in the fifth for his second career round-tripper.

Anderson is the first pitcher to hit the homer that gave his team the lead for good since the Mets’ Noah Syndergaard homered for the only run in the Mets’ 1-0 victory over the Cincinnati Reds on May 2, 2019.

Anderson allowed the two runs on six hits and no walks while striking out two over five innings. David Bednar tossed a one-hit sixth and Richard Rodriguez threw a perfect seventh.

All-Star Bryan Reynolds, who was robbed of a homer in the first by a spectacular over-the-fence grab by centerfielder Brandon Nimmo, hit a two-run homer in the sixth and Ke’Bryan Hayes added an RBI double in the seventh. Nogowski finished 2-for-4 and is 12-for-20 in his first five games with the Pirates.

Stroman (6-7) allowed three runs on five hits and no walks while striking out five over five innings.

Pillar had two hits for the Mets.