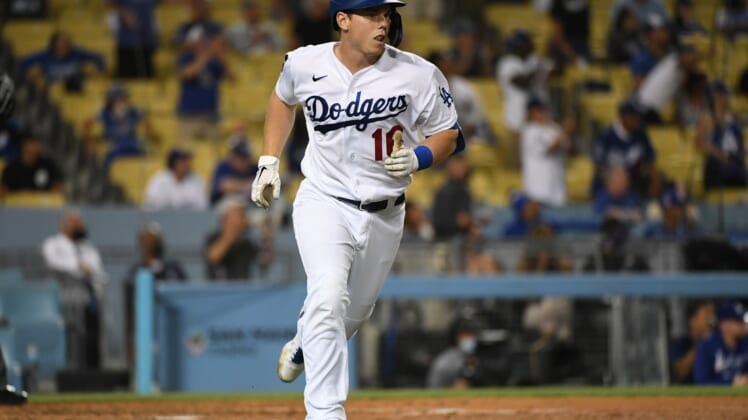 Will Smith and Chris Taylor hit home runs Monday as the Los Angeles Dodgers rallied for a 3-1 victory in the opener of a three-game home series against the Philadelphia Phillies.

The Dodgers won for the sixth time in their last seven games despite a bumpy start from right-hander Tony Gonsolin, who gave up four hits and three walks in 3 2/3 innings but just one run.

Phillies starter Spencer Howard, a native of San Luis Obispo, Calif., opened with a perfect three innings and went four-plus innings overall. He gave up just two hits total, but they were the Smith and Taylor home runs. Philadelphia saw its four-game winning streak come to an end.

The Phillies took an early 1-0 lead on a first-inning RBI single from Bryce Harper. Jean Segura doubled earlier in the inning, coming off three-consecutive three-hit games.

Howard kept the Dodgers’ offense under control, not allowing a baserunner until Mookie Betts walked to lead off the bottom of the fourth. Howard retired the next two Dodgers hitters before giving up his first hit on a blast to left field by Smith, his seventh.

Taylor’s home run, his ninth, led off the bottom of the fifth and chased Howard from the game. Howard walked one and struck out four strikeouts in his 10th career start and first outing west of Denver.

Gonsolin has made just two starts this season after recovering from shoulder inflammation and has given up a combined eight walks in 5 1/3 innings. He gave up seven total walks in 46 2/3 innings last season.

David Price (2-0) went two-thirds of an inning to pick up the victory, as the Dodgers used seven pitchers, including closer Kenley Jansen, who earned his 16th save in 18 chances.

Phillies left-hander Bailey Falter, from nearby Chino Hills, Calif., delivered three scoreless innings in his second career outing, while Philadelphia’s Luke Williams, from nearby Dana Point, had a pinch-hit single in his sixth career game.