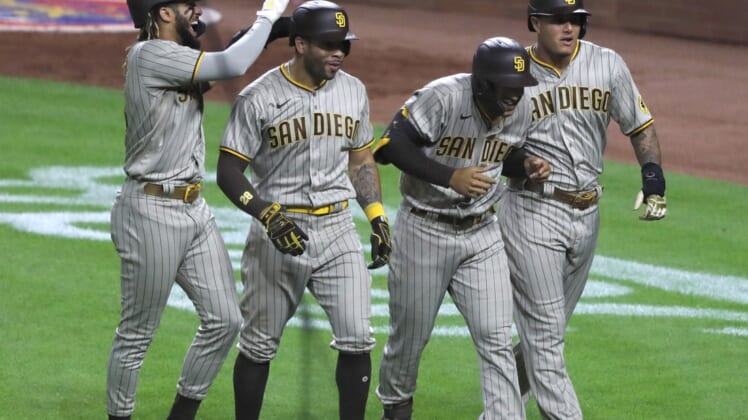 Trent Grisham homered twice, including his first career grand slam, and drove in five runs as the visiting San Diego Padres rallied from an early four-run hole to beat the Cincinnati Reds, 7-5, in a rain-shortened contest Wednesday night.

San Diego starter Joe Musgrove (5-6) lasted just four innings but was credited with the win, and sidewinding lefty Tim Hill pitched a scoreless fifth inning in relief to earn his first save.

The Padres won for the 11th time in 12 games and improved to 6-0 this season against the Reds.

For a second straight night, the Padres and Reds had to wait out a weather delay before first pitch, as the game was delayed 37 minutes at the start with a threat of thunderstorms.

Heavy rains and thunder again halted action with one out in the top of the sixth before the game was eventually called after a 90-minute delay due to a rain-soaked field.

The thunder and lightning weren’t limited to the skies Wednesday as home runs accounted for all seven San Diego runs and four of the five scored by Cincinnati.

Nick Castellanos continued his pace for a career-best year while fortifying his All-Star bid with a three-run homer off Musgrove that just cleared the wall in right field, giving the Reds a 3-0 lead in the first. Joey Votto followed with a double to center and scored on Kyle Farmer’s sacrifice fly, giving the Reds a 4-0 lead.

Musgrove, who threw 37 pitches in the first, had allowed two first-inning runs in his prior 14 starts this season.

San Diego began a comeback in the second against Reds starter Vladimir Gutierrez (3-3) on back-to-back solo homers from Grisham and Wil Myers, whose 434-foot blast reached the bleacher deck in left field. Gutierrez fell behind both batters 2-0.

Fernando Tatis Jr. hit a towering homer down the left field line — his National League-leading 26th — to open the third and narrow Cincinnati’s lead to 4-3.

Votto got that run back in the bottom of the third and made Reds history in the process.

Gutierrez recorded just one out in the fifth before the Padres loaded the bases. Lefty Josh Osich entered the game and surrendered Grisham’s grand slam, which put San Diego up 7-5.