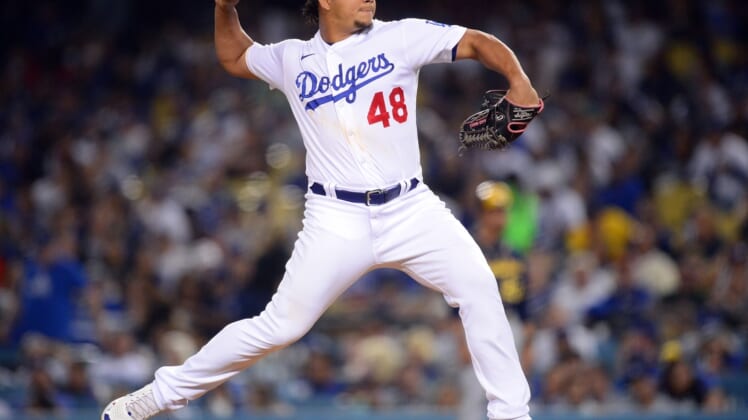 Trea Turner had a grand slam among his two home runs, Matt Beaty hit a go-ahead blast and the Los Angeles Dodgers remained alive to earn at least a tie for the National League West title by rallying for an 8-6 victory over the visiting Milwaukee Brewers on Friday.

Despite the win, the Dodgers still experienced a loss as veteran left-hander Clayton Kershaw left the game with discomfort in his left forearm. There was no immediate word on his availability for the NL playoffs, which start Wednesday with the wild-card game.

The Dodgers (104-56), who already have qualified for the postseason as at least a wild-card team, remain two games behind San Francisco (106-54) in the division with two games to play. The Giants’ magic number is one to deny the Dodgers a ninth consecutive NL West title.

Christian Yelich and Eduardo Escobar each had two hits and two runs for the Brewers (95-65), who are playoff-bound as the NL Central champs but have lost three of four.

After entering with a career 1.89 ERA against the Dodgers, Milwaukee left-hander Eric Lauer gave up five runs on six hits over five innings. He walked two and struck out three.

The Dodgers took a 1-0 lead in the first inning on Turner’s first homer of the game. Milwaukee jumped in front with four hits and three runs against Kershaw in the second inning before he was removed after an RBI double from Kolten Wong.

Escobar and Luis Urias each drove in runs against Dodgers right-hander Brusdar Graterol in the third inning to give Milwaukee a 5-1 lead.

The Dodgers rallied off Lauer in the fifth. They loaded the bases with one out on consecutive singles from Austin Barnes, pinch hitter Albert Pujols and Mookie Betts. Turner then hit a two-out blast to left field, his 27th home run of the season and fourth career grand slam.

Beaty’s home run, his sixth, came as a pinch hitter in the seventh inning off right-hander Jandel Gustave (1-2) and put Los Angeles in front 6-5. Betts scored on a wild pitch in the inning, and Max Muncy added an RBI single as the Dodgers took an 8-5 lead.

Los Angeles right-hander Blake Treinen (6-5) pitched a scoreless seventh inning for the victory, and Kenley Jansen recorded four outs for his 38th save.