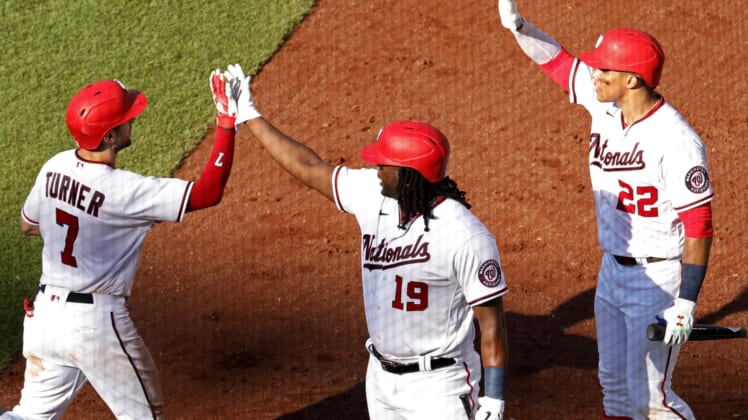 Trea Turner went 4-for-4 and hit for the cycle for the third time in his career to lead the host Washington Nationals to a 15-6 victory over the Tampa Bay Rays on Wednesday afternoon.

Turner’s triple in the sixth inning off Michael Wacha made him the fourth player in the major leagues’ modern era (since 1900) to post three career cycles. He joined Adrian Beltre, Bob Meusel and Babe Herman.

The triple was also Turner’s 100th hit of the season, and it sparked a three-run inning that broke the game open for the Nationals, who won their fourth in a row and swept the two-game series against Tampa Bay. The Rays lost their third consecutive game.

While diving into third base for his triple, Turner jammed his left little finger, and he exited for a pinch hitter an inning later. He is listed as day-to-day.

Turner’s cycle was the first in the majors since Toronto Blue Jays infielder Cavan Biggio’s on Sept. 17, 2019.

Turner scored four runs and hit a solo home run in the fourth off Wacha as Washington’s starting 2-3-4 hitters combined to go 9-for-12 with six RBIs and nine runs.

Juan Soto went 3-for-5 with two RBIs and Josh Bell went 2-for-3 with three RBIs. Soto was replaced on defense in the ninth after he was seen grabbing his left hamstring area following his final at-bat.

Starlin Castro went 2-for-4 with four RBIs, connecting on a two-run home run off Wacha in the sixth.

In three innings of relief, Wacha gave up five runs on seven hits, including three home runs, and walked two while striking out five.

Ryan Sherriff (0-1), who recorded only one out and gave up four runs, took the loss as the Nationals erased a 4-2 Tampa Bay lead in the bottom of the third.

The Rays took that advantage on Mike Zunino’s two-out, two-run home run to left field in the third off Nationals starter Jon Lester (2-3), who picked up the win despite allowing five runs on seven hits, including two home runs, over five frames.