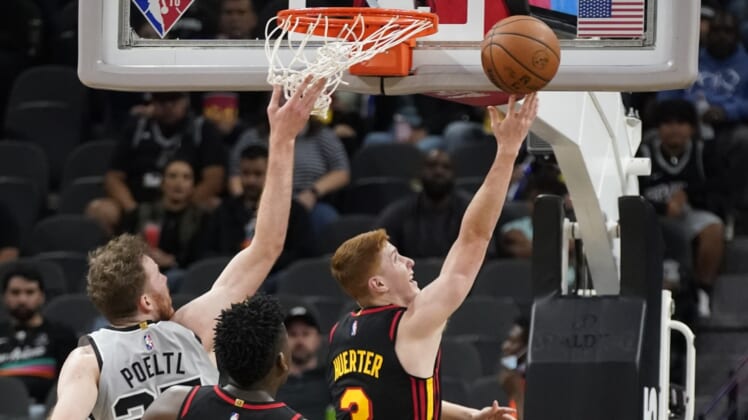 Trae Young scored 31 points and dished out 11 assists and keyed an early third-quarter run that broke open the game as the visiting Atlanta Hawks steamrolled the San Antonio Spurs 124-106 on Wednesday to capture their sixth straight contest.

The Hawks led by seven points at the half and stretched that advantage to 17 by midway through the third period. Young had 10 points in that pivotal stretch and scored 17 of his points after halftime as Atlanta dominated in the second half and won on the road for just the second time this season.

Bryn Forbes led the Spurs with 23 points while Dejounte Murray added 22 points, 11 assists and eight rebounds, and Jakob Poeltl and Keldon Johnson scored 15 points each. Poeltl also grabbed 10 rebounds for San Antonio, which has lost six straight games and is off to its worst start since the 1996-97 season.

The Spurs led by as many as seven points in the first quarter thanks to Murray’s 13 points before two baskets by Young in the final 39.6 seconds evened the game at 27 at the end of the period. The game went back and forth in the second period before the Hawks took a 55-54 lead on Bogdanovic’s 3-pointer at the 3:24 mark and pushed their advantage to 65-58 at the half as Young again hit two late baskets.

Murray led all scorers with 15 points at the half, with Poeltl adding 12 and Forbes contributing 11 points off the bench for the Spurs. San Antonio stayed close thanks to 13 second-chance points.

Young had 14 points at the half for Atlanta while Bogdanovic hit for 10. The Hawks outshot San Antonio 53.1 percent to 43.4 percent over the first two quarters.

Atlanta took charge of the game in the first half of the third quarter, as Young hit for 10 points and assisted on a dunk by Capela to help the Hawks go up 84-67 by the 6:12 mark.