William Nylander scored on a power play at 2:43 of overtime, capping the Toronto Maple Leafs’ 2-1, come-from-behind win over the visiting Tampa Bay Lightning on Thursday night.

John Tavares tied the game for Toronto in the final minute of regulation.

Toronto went on the power play when Victor Hedman was called for slashing 57 seconds into the extra session.

Nylander fired the game-winner from the left circle for his fifth goal of the season to extend Toronto’s winning streak to four games.

Auston Matthews and Mitchell Marner had two assists each for the Maple Leafs, and Jack Campbell stopped 24 shots.

Pat Maroon scored and Andrei Vasilevskiy made 32 saves for the Lightning, who had a three-game winning streak end.

Pierre-Edouard Bellemare hit a goal post for Tampa Bay at 3:49 of the first period. 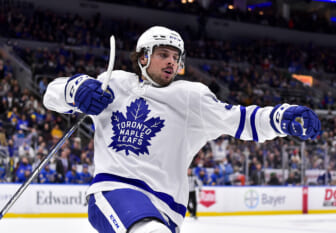 A Maple Leafs turnover in the Lightning defensive zone resulted in Maroon’s goal from the left circle at 13:16 of the first period. Corey Perry carried the puck along the right wing before making a cross-ice pass to Maroon. Erik Cernak also earned an assist.

The Lightning survived Toronto’s two-minute, five-on-three power play when Hedman (hooking) and Mikhail Sergachev (illegal check to the head) were penalized simultaneously at 17:48 of the first period.

Vasilevskiy foiled an attempt by Wayne Simmonds from the edge of the crease on a pass from Nick Ritchie at 9:18 of the second period. The goaltender also kept out a wraparound attempt by Alexander Kerfoot five minutes later.

Campbell stopped a point-blank chance by Mathieu Joseph at 18:32 of the second, Tampa Bay’s first shot on goal in 12 minutes. One minute later, Vasilevskiy stopped Simmonds on a breakaway.

Campbell kept the margin at one goal with a fine save on Brayden Point at 10:51 of the third period. Two minutes later, Campbell frustrated Steven Stamkos. Soon after, he stopped Stamkos twice.

Tavares tied the game with Campbell out for an extra attacker at 19:18 of the third after a Hedman turnover.