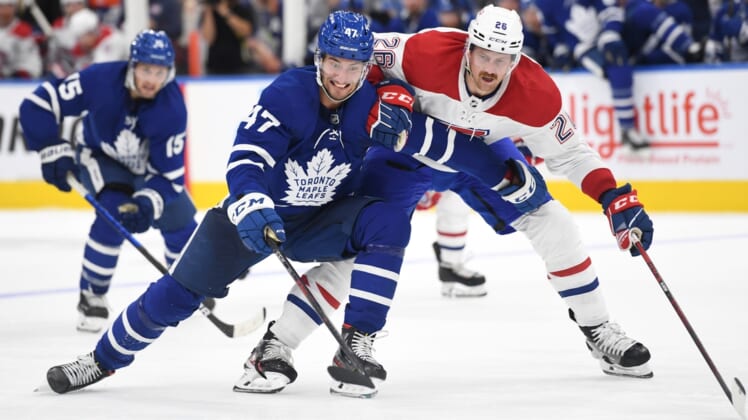 William Nylander scored the go-ahead goal early in the third period and the Toronto Maple Leafs defeated the visiting Montreal Canadiens 2-1 on Wednesday night in the season opener for both teams.

The Canadiens eliminated the Maple Leafs with a seven-game victory in the first round of the playoffs last season.

Nylander decisive shot came from the right circle at 1:06 of the third period. Morgan Rielly and Mitchell Marner had the assists.

Drouin scored on a 7-foot wrist shot at 7:22 of the first period on a pass from Josh Anderson to finish a two-on-one break. Brett Kulak also had an assist. The play started in the neutral zone when the puck came loose after Christian Dvorak hit Toronto defenseman Jake Muzzin along the boards.

Engvall tied the game at 10:12 of the first with a wrist shot from the edge of the right circle. Alexander Romanov was off for interference, Montreal’s second penalty of the period. Michael Bunting and Rasmus Sandin earned assists.

Shots on goal were 9-9 in the first period.

Toronto killed off Montreal’s first power play of the game early in the second period.

Allen foiled Ondrej Kase on a two-on-one with 4:36 to play in the second.

The Maple Leafs had a 23-20 advantage in shots on goal after two periods.

After Nylander’s go-ahead goal, the Canadiens had a five-on-three power play when Jason Spezza, at 5:02, and Marner, 16 seconds later, were penalized for tripping. The Maple Leafs held Montreal to one shot during the man advantage.

Campbell made a good save on Brendan Gallagher with 3:32 to play in the third.

Anderson took a roughing penalty at 18:13 of the third, which hampered the Canadiens’ chances when they removed Allen for an extra attacker. Campbell made a good save in the final seconds.

Toronto center Auston Matthews, coming back from wrist surgery, did not play.