Toronto FC scored three goals in the opening 24 minutes, then held on for a stunning 3-2 win over the New England Revolution on Wednesday in Foxborough, Mass.

The upset occurred just four days after Toronto sustained a club record for margin of defeat in a 7-1 loss to D.C. United, TFC’s sixth consecutive defeat. Head coach Chris Armas was fired after that game, and assistant Javier Perez was installed as Toronto’s interim boss.

Yeferson Soteldo, Kemar Lawrence and Tsubasa Endoh scored during Toronto’s early offensive flurry. Endoh capped off the surge with a wonderfully placed shot from the edge of the box for his first goal of the season as Toronto (2-8-2, 8 points) took a 3-0 lead.

Carles Gil and Adam Buksa scored second-half goals for New England, which almost managed a major comeback. After an on-field alignment chance, the Revolution (7-3-3, 24 points) generated much of the offensive pressure in the final hour of play.

Buksa had a tremendous chance at the equalizer five minutes into stoppage time, but Toronto goalkeeper Alex Bono made what ended up as a game-saving stop.

The Revolution, who lead the Eastern Conference, began the night with a 5-0-0 record on their home field. By contrast, Toronto had the fewest points of any team in MLS.

Soteldo took advantage of a misplay by Revolution goalkeeper Brad Knighton in the ninth minute, resulting in Soteldo firing on an open net for his first MLS goal. 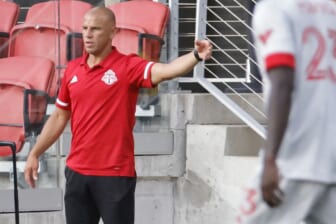 Six minutes later, an Alejandro Pozuelo pass found Lawrence wide open on the left side. Lawrence got in close to the net and delivered a quality left-footed strike for his first goal with Toronto FC.

Gil converted a free kick in the 56th minute to put New England on the board.

New England outshot Toronto by a 21-11 margin, with Buksa leading his club with eight shots. The striker’s effort was rewarded with a goal in the 78th minute, as Buksa headed in an Emmanuel Boateng cross.