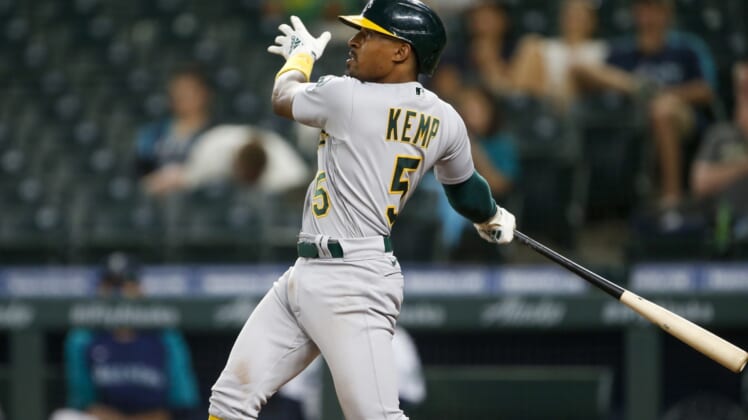 Tony Kemp, batting ninth for Oakland’s struggling offense, went 3 for 4 with a double, home run and career-high-tying five RBIs as the Athletics snapped a three-game losing streak by rallying for a 12-6 victory against the host Seattle Mariners on Tuesday night.

Matt Olson added a home run and three RBIs for the A’s, who hadn’t gone deep since last Wednesday at home against the Mariners.

Taylor Trammell and Tom Murphy homered for Seattle, which had its five-game winning streak come to an end. Trammell was recalled from Triple-A Tacoma earlier in the day when reigning American League Rookie of the Year Kyle Lewis was placed on the 10-day injured list with knee issues.

The A’s trailed 4-2 heading into the seventh inning, when they scored six times.

With one out, Stephen Piscotty grounded a sharp single to center and Elvis Andrus doubled to left, sending Piscottty to third. Kemp hit a sacrifice fly to right, with Andrus taking third.

Sewald replaced veteran lefty Hector Santiago, who was making his Mariners debut. Mark Canha hit a dribbler to the left side of the infield that eluded diving third baseman Kyle Seager and went off the heel of the glove of shortstop J.P. Crawford for a single, bringing home the tying run.

Sewald walked the next two batters before being replaced by lefty Daniel Zamora. Olson lined a two-run single to right to break the tie and Sean Murphy added a two-run double to left.

Kemp hit a run-scoring double in the fifth, a two-run homer in the eighth and a run-scoring infield single with the bases loaded in the ninth.

Mariners left-hander Marco Gonzales, making his first appearance since April 27 because of a left forearm strain, threw 50 pitches over four innings. He allowed one run on two hits, walked one and matched a season high with six strikeouts.