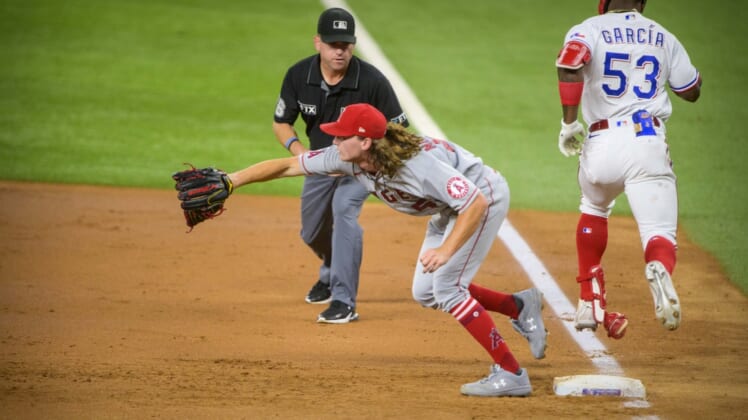 Andy Ibanez had three hits and two RBIs to help the Texas Rangers to a 5-2 win against the Los Angeles Angels in the opener of the three-game series on Tuesday night in Arlington, Tex.

Adolis Garcia also drove in two runs and made two stellar plays in right field, and Jonah Heim collected two hits and an RBI for the Rangers (58-99).

Kolby Allard pitched a 1-2-3 sixth for Texas, Dennis Santana retired all five batters he faced, and Joe Barlow pitched the ninth for his 10th save.

Max Stassi homered for the Angels (74-83), who are nine games under .500 for the first time this season.

Stassi homered for the second time in three games, a two-run shot in the second inning that gave the Angels a 2-0 lead.

Heim answered with a one-out RBI double down the left field line in the bottom half of the inning to cut it to 2-1.

Isiah Kiner-Falefa walked to load the bases and Ibanez came through with a two-run single for a 3-2 lead. Garcia drove in the fourth run of the inning with a ground out to make it 4-2.

Shortstop Kiner-Falefa made a diving backhand catch on a line drive up the middle by Brandon Marsh to lead off the game.

Garcia crashed into the wall in foul territory just as he reached over the fence to snare a fly by David Fletcher for the final out of the second.

Garcia also caught a line drive and doubled up Jack Mayfield at first as he tried to scamper back in the fourth inning.