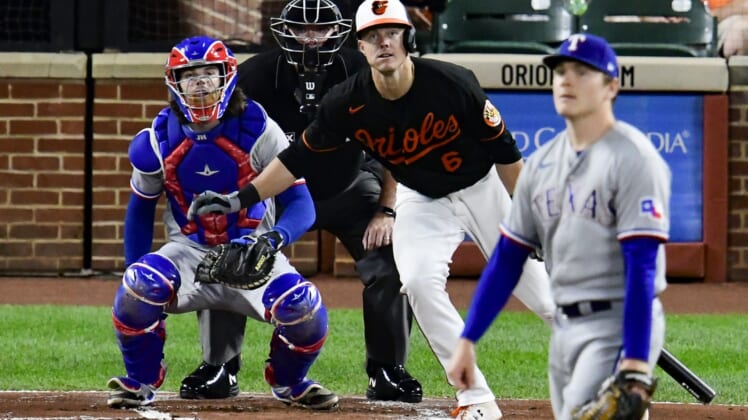 Adolis Garcia had a go-ahead, two-run double in a five-run ninth inning and the Texas Rangers rallied for an 8-5 win against the host Baltimore Orioles on Friday night.

The Orioles took a 5-3 lead into the final inning but the Rangers scored on a sacrifice fly and then loaded the bases with one out, setting up Garcia’s game-winning double off Conner Greene (1-3).

Garcia and Isiah Kiner-Falefa had three hits each, and Nathaniel Lowe homered for the Rangers (56-98), who scored more than three runs for the first time in 10 games.

Cedric Mullins hit a three-run home run for the Orioles to become the first player in team history with at least 30 homers and 30 stolen bases in a season.

Baltimore left-hander Alexander Wells allowed three runs and five hits in five innings, striking out one and walking one for the Orioles (49-105).

The Rangers robbed the Orioles of two homers that would have added three runs.

Wells left a curveball over the plate to Lowe in the first inning and he pulled it over the fence in right for his 16th home run of the season and a 2-0 Texas lead.

Pedro Severino singled to lead off the second and went to third on a one-out single by Pat Valaika. Richie Martin barely beat out a double-play grounder, allowing Severino to score and cut the lead to 2-1.

Howard couldn’t get the final out before Mullins came up and lifted a three-run home run just out of the reach of center fielder Leody Taveras for a 4-2 lead.

Taveras came back and robbed Severino of a two-run homer in the third to keep the deficit at two runs.

The Rangers then put runners on the corners with one out in the fourth and DJ Peters dropped a single into center to score Lowe and make it 4-3. Wells induced a ground-ball double play to escape further damage, however.

Peters robbed Valaika of a possible solo home run to left in the fourth.

Ryan McKenna added an RBI single in the eighth to expand the lead to 5-3.