The Aggies (4-2, 1-2 SEC) drove 54 yards in the final 2:08, with a pass interference call putting Small in chip-shot range. His kick hooked inside the left upright, making Jimbo Fisher the first ex-Nick Saban assistant to beat his old boss in 25 attempts.

Freshman quarterback Zach Calzada completed 21-of-31 passes for 285 yards and three touchdowns, tying the game at 38 on a 25-yard scoring strike to Ainias Smith with three minutes left in the game.

After the Crimson Tide went 3-and-out, Calzada threw for two first downs and ran for a third to set up Small.

Alabama quarterback Bryce Young hit on 28-of-48 passes for 369 yards and three scores. His 7-yard touchdown toss to Jameson Williams with five minutes remaining gave the Tide (5-1, 2-1) a 38-31 advantage, but their defense couldn’t finish it off.

Texas A&M initiated scoring on Small’s 38-yard field goal just 3:25 into the game, putting Alabama behind for the first time since its win last year over Georgia. 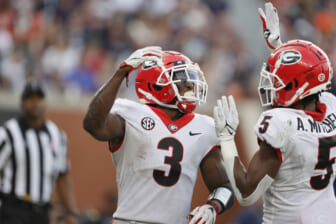 Young found Roydell Williams with a 20-yard touchdown pass at the 6:42 mark for a 7-3 Crimson Tide lead, but the Aggies took just 76 seconds to respond. Calzada hit Jalen Wydermyer with a 27-yard scoring strike to make it 10-7, then connected with Smith on a 6-yarder with 33 seconds remaining to up the lead to 10.

Will Reichard converted a 38-yard field goal 5:44 before halftime to bring Alabama within seven, but Isaiah Spiller’s 15-yard burst up the middle with 2:09 left allowed A&M to take a 24-10 lead into intermission.

The teams traded special teams touchdowns 18 seconds apart in the third quarter. King Mwikuta covered a blocked punt in the end zone for the Tide, but Devon Achane returned the ensuing kickoff 96 yards to restore a two-touchdown lead for the Aggies. 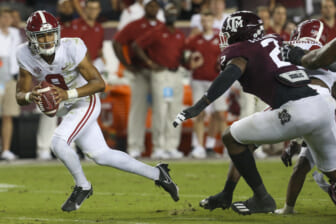