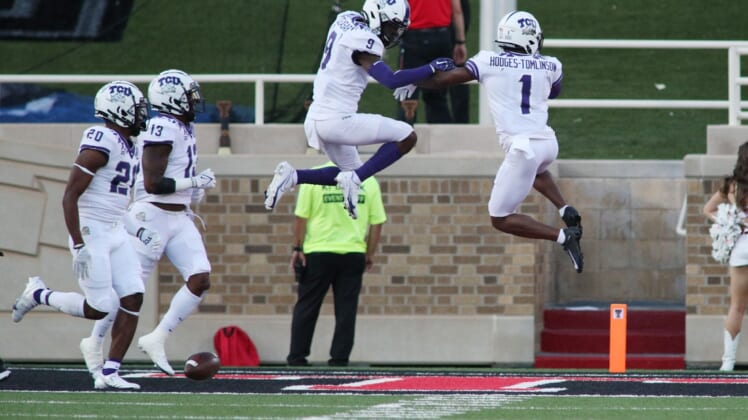 Texas Tech spent the week wondering how it would slow down TCU’s two-pronged offensive threat of quarterback Max Duggan and running back Zach Evans.

Turns out Duggan was less a threat than expected but Evans and backup Kendre Miller were much more than the Red Raiders bargained for in Saturday’s 52-31 Horned Frogs’ victory in Lubbock.

That duo combined for 328 rushing yards to fuel a 394-yard day on the ground.

Miller took over as primary ball carrier late in the first half after Evans suffered an apparent foot injury on a touchdown run, and TCU (3-2, 1-1 Big 12) didn’t miss a beat. Miller slashed through the Red Raiders (4-2, 1-2) for 185 yards and three touchdowns — two in the second half. Evans ran for 143 yards and two scores in the first half.

The Horned Frogs needed that kind of production because Texas Tech rolled up 558 yards of total offense. SaRodorick Thompson ran for 118 yards and three touchdowns to lead the way. Henry Colombi threw for 344 yards but faced intense pressure from the TCU defense most of the night.

Trailing 35-10 at halftime, the Red Raiders showed life in the third quarter with a pair of quick-drive touchdowns. The problem was trying to defend TCU’s running game in between.

Texas Tech ate up 75 yards on consecutive possessions, each ending with a short rushing score, to bite into a deficit that grew to 38-10 when Griffin Kell boomed a 48-yard field goal on the Horned Frogs’ first series of the second half.

TCU responded between Texas Tech touchdowns when Miller wiggled through a hole on an off-tackle run and dashed down the sideline for a 75-yard TD. He also broke free for a 45-yard touchdown with 4:51 left in the game to finally ice the victory.

The Horned Frogs were in firm command at halftime after dominating the game’s early stages. TCU produced touchdowns on each of its four first-half drives (not counting a final kneel-down) and churned out 306 yards in the process.

With Evans as the catalyst, the Horned Frogs put together three touchdown drives of 75 yards and another that covered 79 yards.

While the offense flourished, the TCU defense also chimed in to keep Texas Tech in check. The Red Raiders produced only 151 yards in the first 30 minutes and struggled to stay on the field, going 2-for-6 on third downs.

The Horned Frogs also got a touchdown from the defense when Tre’Vius Hodges-Tomlinson snared a Colombi pass that banged off the hands of Texas Tech receiver Myles Price and dashed 29 yards to the end zone to make it 28-7 early in the second quarter.