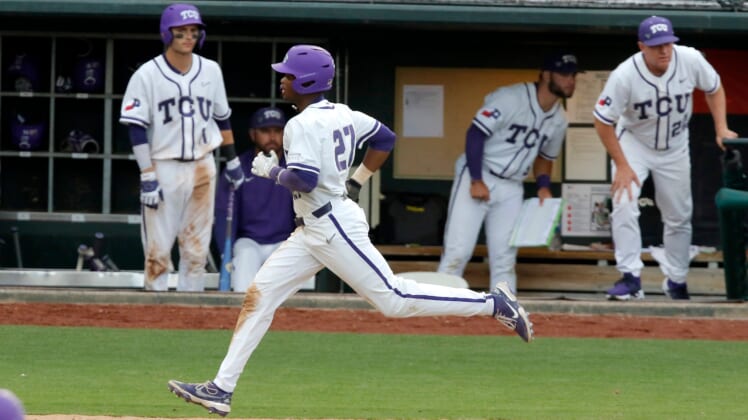 TCU baseball had a historic day on Saturday when the program posted an insane 30 runs in one game.

Suffice to say the TCU Horned Frogs absolutely crushed the Kansas Jayhawks during their day game at Amon G. Carter Stadium. Seeing double-digit runs in a high-level baseball game isn’t uncommon, but when it gets into the thirties things are getting ridiculous and a mercy rule is almost needed.

The shellacking from the Horned Frogs began in the opening inning when they dropped a seven-spot and what would be one of two home runs from Porter Brown. By the third inning, things started to enter the ridiculous zone when Braden Taylor crushed a two-run home run that brought the score to 12-1.

As you can imagine the beatdown did not stop there. By the seventh inning, the score was already at 18-3 when Brown once again decided to terrorize the Jayhawks. This time he clobbered a 435-foot shot to center. However, it was no run-of-the-mill homer. It was actually a grand slam and took Brown to 10 RBIs on the day. Furthermore, it would not be the team’s last slam of this unbelievable game.

With the score at a ridiculous 26-3 in the ninth inning, Gray Rodgers would hit the team’s second grand slam with a bomb to right field that brought the score to 30-3.

What is stunning about the TCU baseball team’s historic day, is the fact that the 30 runs they posted did not break the school’s all-time record, it only tied it. However, Brown’s 10 RBIs were a TCU first. The program that is ranked 20 in the nation would earn its third straight win in crushing their opponents from Kansas.

If the insane output from TCU baseball made you curious about the most runs ever scored in a college baseball game, that honor goes to a 2015 Division-II matchup between Minnesota State and Bemidji State. In that game, the two teams put up a record 61 runs as Bemidji State was victorious 41-20.