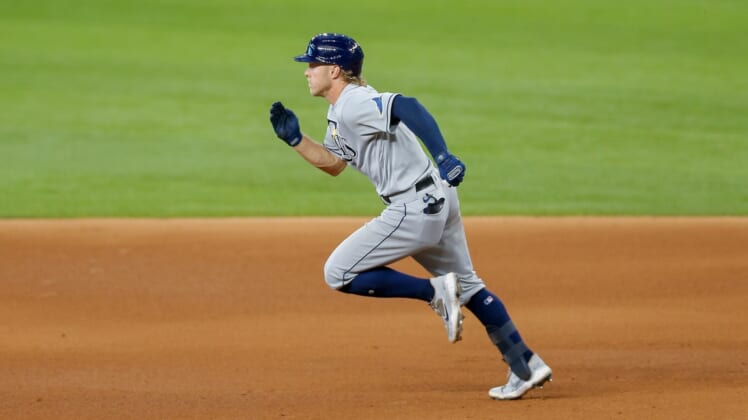 Trailing 1-0 in the top of the eighth, Tampa Bay filled the bases on a throwing error by shortstop Isiah Kiner-Falefa, an infield single from Randy Arozarena and an eight-pitch walk by pinch hitter Mike Brosseau against left-hander John King (5-4).

Yandy Diaz tied it on a walk against righty Josh Sborz, and Walls ripped a double to plate Arozarena and Brosseau for a 3-1 lead.

Tampa Bay tallied four more times in the ninth to win two of three from Texas and improve to 6-0-1 in its past seven series.

Walls recorded his first career game-winning hit and three-hit outing by going 3-for-5, and Austin Meadows pushed his hitting streak to 10 games with a two-hit day.

In a bullpen game, Rays opener Michael Wacha went 2 2/3 innings, surrendering one run, two hits and two walks while striking out one.

Brock Holt and Jason Martin each had two hits for the Rangers, who allowed five unearned runs in the loss.

Texas starter Dane Dunning was sharp over five scoreless innings. The Rays scratched out just three singles and two walks against the right-hander, who struck out six.

In a rocky first inning, Wacha extricated himself from trouble with Rangers on the corners after hits by Holt and Kiner-Falefa to open the frame. Texas then scored on a double play.

Holding the 1-0 lead over his 80-pitch start, Dunning rolled through Tampa Bay’s recently hot lineup, with only one runner – Walls – reaching second base.

A defensive replacement in the bottom of the seventh, Tampa Bay center fielder Kevin Kiermaier saved a run on a diving catch of Kiner-Falefa’s two-out sinking liner with Martin on third base and reliever J.P. Feyereisen (2-2) in.

In the eighth and ahead 3-1, Feyereisen pitched out of a sticky situation when he retired pinch hitter Adolis Garcia – owner of a club-best 16 homers – on a towering two-out fly to center that Kiermaier caught on the warning track with two runners on.

Kiner-Falefa committed his second error when he misplayed a line drive with two outs in the ninth, and Meadows singled in two insurance runs on the next at-bat. Diaz’s two-run homer – his first — five pitches later provided the final margin.