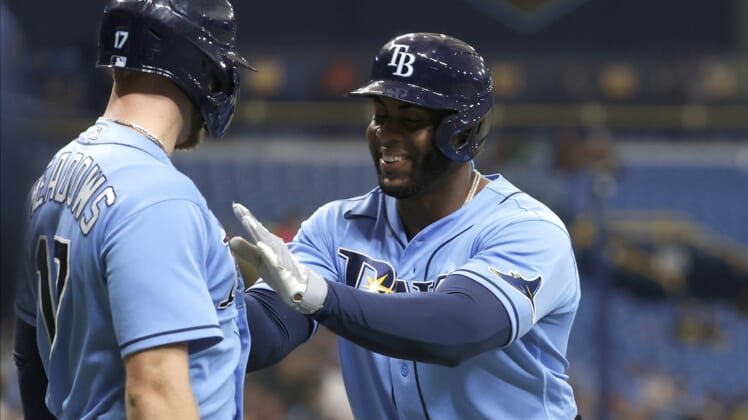 Yandy Diaz slugged a two-run shot for one of Tampa Bay’s three home runs, Wander Franco drove in a pair of runs and the Rays topped the visiting Boston Red Sox 7-3 to open a three-game series on Friday night.

Tampa Bay pulled within a half game of first-place Boston in the American League East standings. The Red Sox’s 1 1/2-game lead over the Rays to start the day was the smallest margin between first- and second-place teams in any division.

Christian Vazquez, Bobby Dalbec and Hunter Renfroe each drove in a run for Boston. Red Sox starter Martin Perez (7-7) surrendered a season-high-tying six runs on seven hits with one walk and three strikeouts in four innings.

The Red Sox have dropped back-to-back games and three of their last four.

Diaz’s seventh homer of the season put Tampa Bay up 2-0 in the first inning. Franco doubled the Rays’ lead with his third-inning double. Boston answered with a pair of runs in the fourth as both Vazquez and Dalbec knocked RBI singles.

Zunino joined Brandon Lowe and Austin Meadows as the only Tampa Bay hitters with 20 home runs this season courtesy of his solo shot in the fourth. Arozarena clubbed his 14th homer of the campaign two batters later to make it 6-2.

Renfroe’s RBI double in the fifth got a run back for the Red Sox, but they gave it right back when Franco scored on reliever Yacksel Rios’ wild pitch in the home fifth.