WATCH: Tampa Bay Rays shut down Texas Rangers to even up series 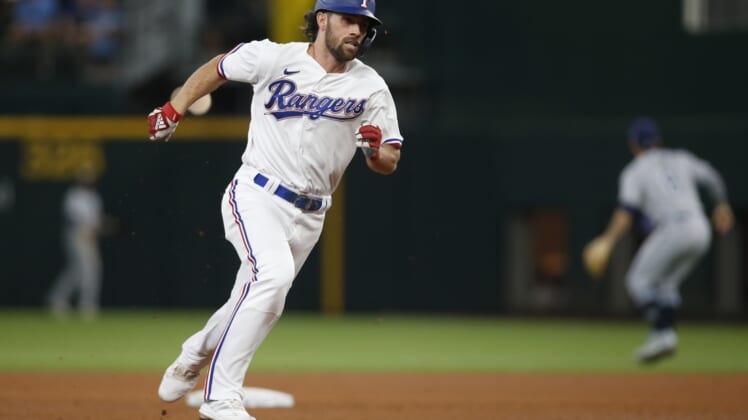 Austin Meadows produced a two-run single, Margot clubbed his fifth long ball and Yandy Diaz, Taylor Walls and Randy Arozarena each had singles for the Rays, who are 18-4 in their past 22 games and evened their weekend series with Texas at 1-1.

In his first start since being named the American League’s Pitcher of the Month for May, Hill (5-2) breezed through five frames, yielding just two hits and a walk while fanning three. The 41-year-old lefty faced just 17 batters — two over the minimum.

Charlie Culberson stroked his first triple, and left-hander Kolby Allard (1-2) allowed two runs and three hits over five innings in his second start for Texas. He struck out six and walked one.

The Rays’ staff crafted its fifth shutout, while the Rangers’ offense was blanked for the seventh time.

Entering the game averaging a major-league-best six runs a game on the road, the American League East-leading Rays took all of three batters to get on the board with a 2-0 lead. 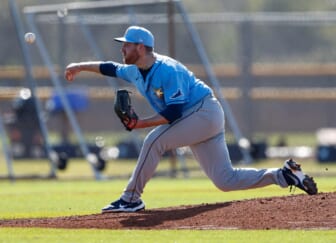 Margot drew a walk from Allard, and Diaz singled to center to move him to third and aggressively took second on the throw. Meadows ripped a two-run single to center for the early advantage.

Posting a 1.11 ERA over his last seven starts, Hill faced the minimum 10 batters over the first 3 1/3 innings — Adolis Garcia walked but was put out trying to advance on a pitch in the dirt in the first — before Garcia recorded the first Texas hit in the fourth.

Hill departed after only 59 pitches — 43 strikes — and was replaced in the sixth by sidewinding Ryan Thompson, who tossed 1 1/3 innings of one-hit relief before turning the duties over to Jeffrey Springs with one out in the seventh.

The left-handed Springs retired both Texas batters, and Margot padded the lead in the eighth with his fifth homer to left field on a 1-2 changeup from Joely Rodriguez for a 3-0 lead.

Pete Fairbanks struck out two in the eighth and closer Diego Castillo whiffed the side in a perfect final frame to notch his ninth save in 11 chances.