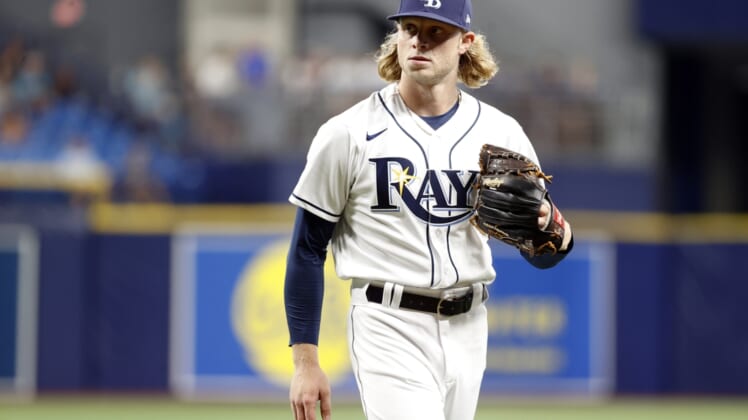 The Rays (93-58) activated the 22-year-old Baz on Monday. He had stints at Double-A Montgomery, Triple-A Durham and with the U.S. Olympic team this season.

Baseball America’s No. 11 overall prospect, the right-handed Baz (1-0) allowed two hits — both solo homers — in five innings. He retired 15 of the 17 batters he faced and did not reach a three-ball count. He struck out five.

With the bases loaded and two outs in the ninth, Dietrich Enns battled back from a 3-0 count against pinch hitter Breyvic Valera and got him looking for his second save.

The Rays beat Toronto for the 10th time in 17 tries this season.

Teoscar Hernandez and Lourdes Gurriel Jr. slugged the solo homers for the Blue Jays (84-66). Marcus Semien had a two-run homer in the ninth, his 41st of the season, for Toronto.

Baz fanned leadoff hitter George Springer swinging on an 87 mph slider, got a grounder from Semien and struck out Triple Crown candidate Vladimir Guerrero Jr. swinging on a high 99 mph fastball in the first inning.

Hernandez got to Baz’s high 0-1 fastball in the second, lifting a home run — his 29th, and his 107th RBI — near the tank of aquatic stingrays in right-center.

Gurriel made it 2-0 with a homer to left off a Baz slider that stayed middle-in. The blast was the left fielder’s 20th this season — tying his career high set in 2019.

After Taylor Walls and Kiermaier singled with one out in the fifth, Diaz belted a 1-2 fastball to left-center for his 12th homer and a 3-2 lead. Randy Arozarena’s double two batters later chased Ray.

Manuel Margot’s RBI single in the seventh and Wendle’s homer into the first row in right added insurance runs.