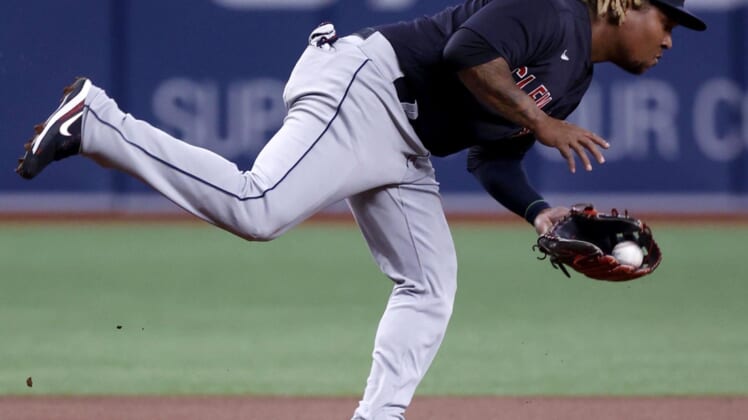 With the Rays trailing 8-7 in the ninth, rookie Wander Franco lined a single to left to score pinch runner Brett Phillips with no outs, tying the game against Cleveland’s Emmanuel Clase (3-4).

Diaz produced two hits, including a solo homer, to go along with his first career walk-off RBI. Brandon Lowe clubbed his first career grand slam and Manuel Margot went 4-for-4 with two RBIs for Rays, who won for the 11th time in their past 13 meetings with the Indians.

Pete Fairbanks (2-3) earned the win with a perfect top of the ninth.

Cleveland’s Franmil Reyes rocketed his 12th homer — his first since returning from a monthlong injured-list stay caused by an abdominal stream. He also doubled, tied a career high with five RBIs and stole a base.

The Indians scored all of their runs in the fourth, fifth and sixth innings.

Owning just nine hits against left-handed pitching this year to start the game but four of them homers, Lowe crushed a 1-1 center-cut fastball to right after the Rays loaded the bases with one out in the second inning. The blast came off Indians lefty Logan Allen.

Down 4-0, the Indians scored in the fourth when Amed Rosario opened with a double and came home on Reyes’ hard single to left.

After the Rays pushed the lead back to four on a sacrifice fly by Margot in the bottom of the fourth, Cleveland rallied in the fifth. Rosario had an RBI groundout and Jose Ramirez followed with a run-scoring single. Reyes slammed a two-run homer to round out the four-run frame and knot the game at 5.

A looping single just beyond a drawn-in infield by Hernandez in the sixth plated Oscar Mercado to give the Indians their first lead of the contest.

Reyes padded the margin three batters later with a two-run double — his third hit in three innings for an 8-5 advantage.

Margot hit an RBI single in the bottom of the sixth. Diaz’s homer in the seventh pulled the Rays within 8-7, setting up the ninth-inning heroics.