WATCH: Tampa Bay Rays pitching too much for Miami Marlins in 8-0 rout 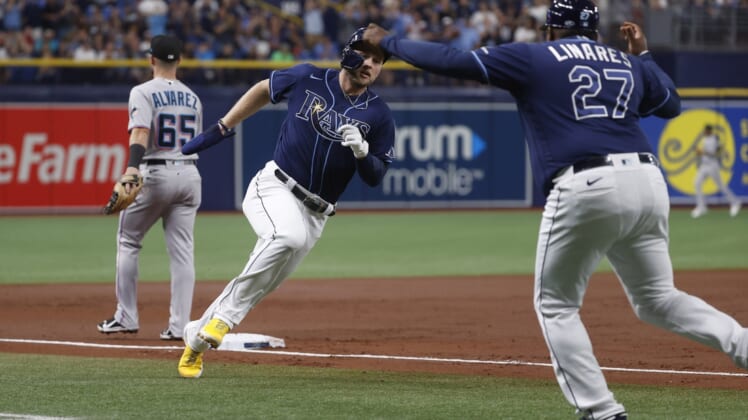 Ryan Yarbrough and two Tampa Bay pitchers combined on a two-hit shutout, Wander Franco returned to reach base in his 40th consecutive game and the Rays beat the Miami Marlins 8-0 on Friday in St. Petersburg, Fla.

Following David Robertson, who served as the opener for the first time in his career, Yarbrough (9-6) was crisp in the bulk role and crafted six sharp relief innings.

The left-hander yielded two hits, struck out four and did not walk a batter as he recorded his first win this month. He threw 80 pitches.

In his first game since Sept. 10, Franco — who went 1-for-4 with a double — walked to lead off the sixth to move his streak of consecutively reaching base by a player under 21 to within three of Hall of Famer Frank Robinson’s record mark of 43 set in 1956.

Randy Arozarena ripped a three-run double for the Rays (95-59), who have been victorious in three of four against Miami.

The Marlins (64-89) only mustered a single by Lewis Brinson and a double by Jesus Sanchez.

Center fielder Bryan De La Cruz was ejected by home plate umpire John Libka for arguing his strikeout to end the top of the first.

Catcher Sandy Leon pitched a scoreless eighth inning as the Marlins decided to rest their bullpen.

In a 40-pitch home half of the frame, the Rays loaded the bases against Cabrera with two outs and none on behind Nelson Cruz’s single and walks to Ji-Man Choi and Austin Meadows.

Arozarena then lashed a 3-2 changeup into the left field corner that cleared the bags for a 3-0 lead.

Against the shift in the fourth, lefty-hitting Kiermaier dropped a double just inside the left field line with the outfield shaded toward right field. Joey Wendle (single) and Mejia (double) crossed the plate for a 5-0 edge.

In the next inning, Mejia knocked a two-out, two-run single to center, and Kiermaier’s misplayed triple in center in the seventh provided the final margin.