Austin Meadows belted a pair of two-run homers and Ji-Man Choi also went deep to highlight his second four-hit performance of the season as the visiting Tampa Bay Rays posted an 8-2 victory over the Cleveland Indians on Saturday.

Choi, who drove in three runs and scored three times, had four hits in Tampa Bay’s 13-3 romp over the Los Angeles Angels on June 26.

Former Indians farmhand Joey Wendle also had four hits for the second time this season for the Rays, who have won 11 straight games against Cleveland dating back to the 2019 campaign. Tampa Bay has won 13 of its last 16 games to move into a tie atop the American League East with the Boston Red Sox.

Louis Head (1-0) relieved opener Drew Rasmussen and struck out four of the nine batters he faced to record his first major league win. Head, who was recalled from Triple-A Durham on Friday, allowed one run on two hits in two-plus innings.

The Indians mustered just five hits en route to losing for the 15th time in 21 games. DeMarlo Hale managed the team in place of Terry Francona, who returned home because of a lingering head cold.

Choi deposited a 1-1 fastball from J.C. Mejia (1-6) over the wall in left field to open the scoring in the first inning. The homer was the sixth of the season for Choi, who had a three-run blast to highlight a six-run ninth inning in Tampa Bay’s 10-5 victory over Cleveland on Friday night. 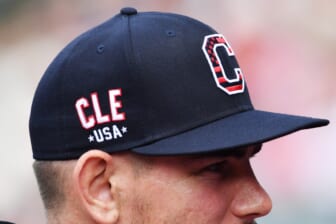 Bobby Bradley answered in the second inning with his 11th homer of the season before the Rays continued their power display in the third.

Brett Phillips led off the inning by sending an 0-1 changeup from Mejia over the wall in right field to give Tampa Bay a 2-1 lead. Choi added a double two batters later and Meadows brought him home after depositing a 1-0 slider from Mejia just inside the right-field foul pole.

Bradley Zimmer scored on a groundout to trim Cleveland’s deficit to 4-2 in the sixth inning, however Choi regained Tampa Bay’s three-run cushion with an RBI double to left field in the seventh.

Choi added an RBI single in the ninth inning before Meadows capped the scoring with his 18th homer of the season.