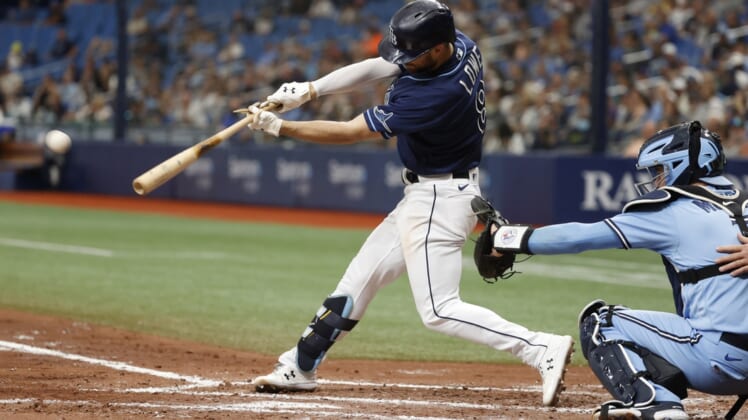 After losing Tuesday despite being issued 11 walks and a hit batter, the Rays (94-59) erupted by batting around against Toronto for the third time this season.

The lefty-hitting Meadows struck the big blow. Yandy Diaz (sacrifice fly) and Taylor Walls (two-run single) brought home tallies as Tampa Bay sent 10 men to the plate, setting the groundwork for its 11th win in 19 games against its Canadian rival.

The victory sent the American League East-leading Rays to their third consecutive postseason — seventh in club history — and improved their major-league-best record in day games to 39-19.

The Blue Jays (85-67) got a 2-for-3 showing, with a double, walk and a run from Vladimir Guerrero Jr. but managed only four hits.

They lost for just the fifth time in 21 games in September.

Julian Merryweather served as the opener and pitched a scoreless inning — allowing a hit and a walk — before turning the duties over to Ross Stripling (5-7), who was rocked for five hits and five runs in 1 1/3 innings pitched.

Diaz lofted a sacrifice fly, and Meadows drove Stripling’s belt-high 91 mph fastball an estimated 443 feet — his 26th homer and longest in 2021 — with the blast landing on top of the tarp deep in right-center.

Both benches emptied without incident in the eighth after Toronto’s Ryan Borucki hit Kevin Kiermaier in the middle of the back with a 93-mph pitch.

Kiermaier became the center of attention Monday after collecting and keeping a loose Toronto data card following a slide at home plate.

Borucki and Toronto pitching coach Pete Walker were ejected during the on-field delay.