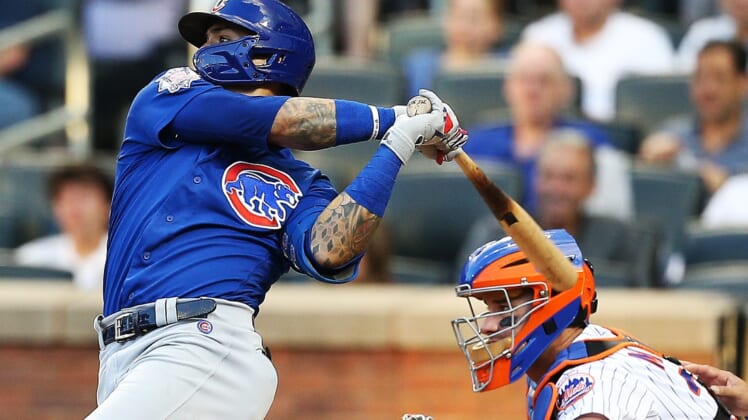 Taijuan Walker struck out a career-high 12 batters while earning the win and Pete Alonso collected all three RBIs as the host New York Mets edged the Chicago Cubs 3-2 on Tuesday.

The Mets have won the first two games of the four-game series and seven of their past nine overall. The loss was just the third in nine games for the Cubs.

Walker (6-2) overcame some early struggles and allowed five hits — including a two-run homer in the third by Javier Baez — while walking none in a seven-inning outing. He retired the final 12 batters he faced, seven by strikeout, and 14 of 15 following Baez’s homer.

Walker ended his night by whiffing Rafael Ortega to break his previous career high of 11 strikeouts, set six times previously and most recently on April 27, 2017, when he was pitching for the Arizona Diamondbacks against the San Diego Padres.

Seth Lugo earned his first save by tossing the final two innings.

Lugo got into trouble in the ninth, when he gave up back-to-back one-out singles to Willson Contreras and pinch hitter Eric Sogard. However, Cubs third base coach Willie Harris sent home Jake Marisnick, pinch-running for Contreras, on Sogard’s single to right, and second baseman Luis Guillorme’s relay throw beat Marisnick by several strides.

Jason Heyward then walked before Lugo struck out Sergio Alcantara for the final out.

The Mets, who scored all their runs with two outs in a 5-2 win in Monday’s series opener, once again rallied with two outs for their first two runs Tuesday.

After Baez’s two-run shot in the top of the third, New York wasted no time evening the score against Cubs starter Alec Mills (2-1) in the bottom of the inning. Jonathan Villar drew a one-out walk and was forced on a grounder by Francisco Lindor before Dominic Smith doubled. Alonso laced the game-tying single on the next pitch.

Villar’s one-out single chased Mills in the fifth. Lindor greeted Rex Brothers with another single before Smith drew a walk. Alonso followed with a sacrifice fly to deep left.

Villar finished with two hits, as did Contreras.

Chicago’s Kris Bryant was hit on the right hand by a Walker pitch in the first inning and was pulled for Patrick Wisdom prior to the bottom of the second.

Mills allowed three runs on five hits and two walks while striking out six over 4 1/3 innings.