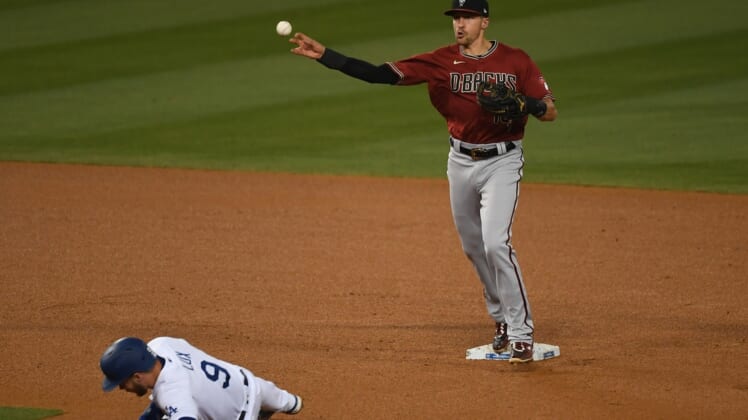 Will Smith and Mookie Betts drove in late runs and the Los Angeles Dodgers rallied for a 4-2 victory over the Arizona Diamondbacks on Wednesday to improve to 7-1 on a nine-game homestand.

Clayton Kershaw pitched six strong innings as the Dodgers won the first three games of a four-game series. The left-hander gave up two runs on two hits with one walk and eight strikeouts.

The Dodgers have won each of their past three series after not winning a series in six tries.

Eduardo Escobar hit a home run for the Diamondbacks and spot starter Matt Peacock was solid, giving up just one run over 5 1/3 innings. Arizona lost its fourth consecutive game and fell for the seventh time in eight contests.

Both Dodgers newcomers contributed to the victory as Yoshi Tsutsugo had an RBI single and Albert Pujols had a pinch-hit bloop single in Los Angeles’ three-run seventh inning.

The Diamondbacks took a 2-0 lead in the fourth inning on a two-run homer to center from Escobar. It was his 10th of the season.

In the bottom of the fourth, Max Muncy doubled with one out and scored on Tsutsugo’s two-out single to left. Tsutsugo collected his first hit and RBI with the Dodgers since he was acquired from the Tampa Bay Rays on Saturday.

The Dodgers loaded the bases with no outs in the seventh on walks to Chris Taylor and Gavin Lux before Pujols’ single to shallow right tipped off the glove of first baseman Pavin Smith.

Pujols tied Eddie Murray for 13th on the all-time hit list at 3,255 while playing in his third game after signing with the Dodgers on Monday.

With one out, Will Smith hit a sacrifice fly to Josh Rojas in right field, but the ball glanced off Rojas’ glove, allowing two runs to score and giving Los Angeles a 3-2 lead. Betts followed with an RBI double that just missed the glove of center fielder Tim Locastro.

Dodgers right-hander Joe Kelly (1-0) pitched a perfect seventh inning for the victory, and right-hander Kenley Jansen tossed a 1-2-3 ninth for his ninth save.

Arizona’s Joe Mantiply (0-1) gave up two runs while recording one out in the seventh.