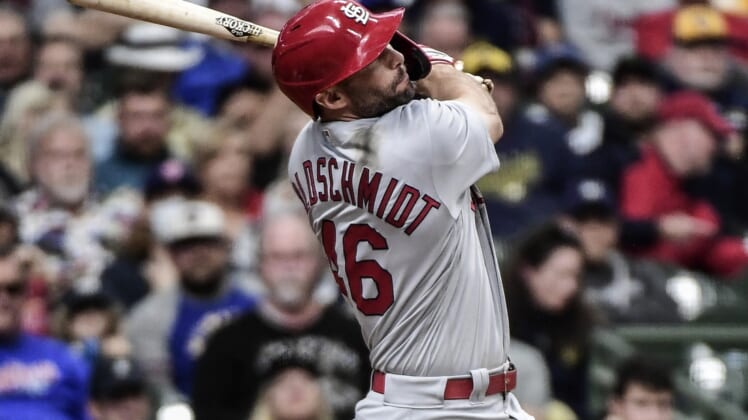 Paul Goldschmidt homered twice and the visiting St. Louis Cardinals overcame a five-run deficit to beat the Milwaukee Brewers 8-5 on Thursday, continuing their playoff push with a sweep of the National League Central leaders and extending their winning streak to 12.

After Goldschmidt’s two-run home run tied it in a four-run seventh, St. Louis went ahead 7-5 with two in the eighth off Aaron Ashby (3-1), who came on to start inning.

Nolan Arenado walked to open the eighth and went to third on a single by Dylan Carlson, who took second on the throw. Arenado scored and Carlson advanced on a passed ball. Yadier Molina followed with a sacrifice fly.

Goldschmidt’s ninth-inning solo homer, his 29th, made it 8-5.

T.J. McFarland (4-1) got the victory with a scoreless inning of relief. Giovanny Gallegos pitched a perfect ninth for his 12th save.

St. Louis (83-69) pulled within 7 1/2 games of Milwaukee (91-62), which has secured a playoff spot but lost five straight. The Cardinals entered Thursday 4 1/2 games ahead of Cincinnati and Philadelphia for the second wild card, with San Diego six games back. The last time St. Louis won 12 straight was April 1982.

After being held in check by starter Adrian Houser, St. Louis rallied in the seventh against the Brewers’ bullpen. The Cardinals loaded the bases against Jake Cousins on a one-out single by Edmundo Sosa and walks to Harrison Bader and pinch-hitter Lars Nootbaar.

Tyrone Taylor, activated off the injured list Monday, put the Brewers up 4-0 in the first with a grand slam off Adam Wainwright and then made it 5-0 in the fourth with his 12th homer.

The Cardinals got a run in the fifth when Carlson tripled and Molina singled, but they left the bases loaded.

After Kolten Wong singled to open in the first, Wainwright retired the next two hitters before Eduardo Escobar worked a nine-pitch walk. Luis Urias walked to load the bases and Taylor gave the Brewers their first lead of the four-game series.

Wainwright, who allowed five runs in four innings, struck out Luis Urias to open the fourth for his 2,000th career strikeout, joining Hall of Famer Bob Gibson as the only St. Louis pitchers to reach that milestone.