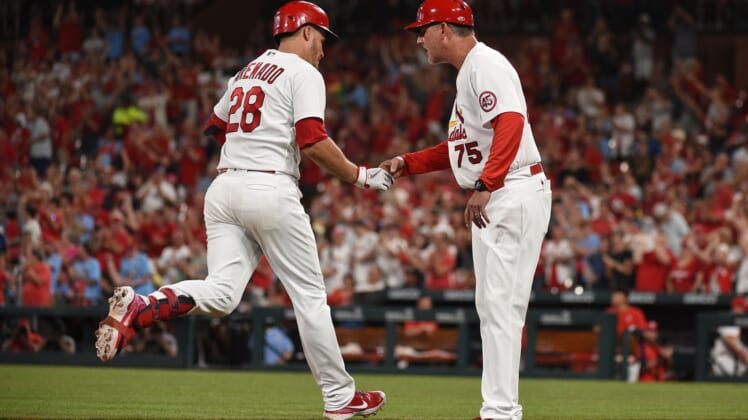 The Cardinals won for the third time in four games while the Diamondbacks lost for the 23rd time in 25 games.

Alex Reyes blanked the Diamondbacks for the final two innings to earn his 19th save.

Diamondbacks starting pitcher Caleb Smith (2-4) struck out eight batters in five innings and held the Cardinals to four hits — but one was Nolan Arenado’s two-run homer.

Tommy Edman hit a leadoff single in the fifth inning and Arenado lined his two-out, two-run homer off the left field pole to give the Cardinals a 2-0 lead.

The Diamondbacks finally got to Martinez in the sixth. Josh Rojas hit a leadoff single, moved up on a groundout and scored on Eduardo Escobar’s single to cut the deficit to 2-1.

The Cardinals countered with a two-out rally in their half of the inning. Edmundo Sosa hit an infield single, Matt Peacock hit Matt Carpenter with a pitch, and Edman yanked an RBI single to make it 3-1.

Christian Walker hit a leadoff double off reliever Genesis Cabrera in the seventh and moved to third on a bunt. After Nick Ahmed struck out, Asdrubal Cabrera and Rojas drew walks to load the bases.

Andrew Miller walked Pavin Smith, forcing home a run to cut the deficit to 3-2. But Escobar flied out to strand three runners.

But Walker struck out and Stephen Vogt grounded into a double play to end the threat.