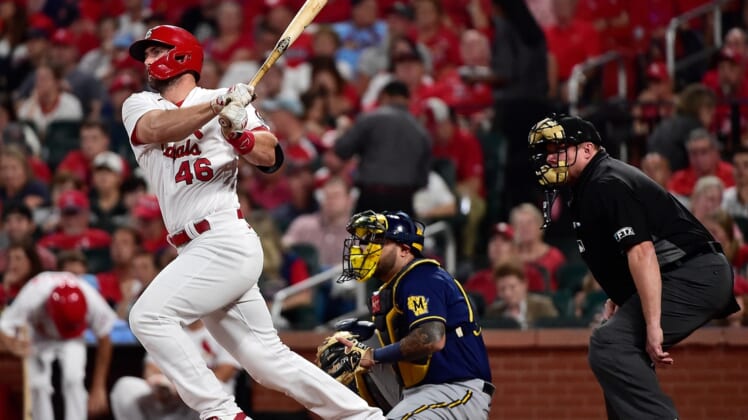 Adam Wainwright earned his 17th victory as the St. Louis Cardinals defeated the visiting Milwaukee Brewers 6-2 on Tuesday night to clinch their berth in the National League wild card game.

Wainwright (17-7) allowed two runs on seven hits in six innings and drove in a run as the Cardinals (88-69) extended their team-record winning streak to 17 games.

Nolan Arenado hit a homer and drove in two runs and Jose Rondon hit a solo homer for the Cardinals.

Luis Urias hit a two-run homer for the Brewers (94-63), who lost for the sixth time in their last nine games.

With their NL Central title in hand, the Brewers limited starting pitcher Brandon Woodruff to 63 pitches. He allowed two runs on seven hits in four innings.

Aggressive baserunning cost the Cardinals in the third inning. Paul Goldschmidt hit a one-out single but was thrown out trying to score on Tyler O’Neill’s double.

Urias put the Brewers up 2-0 with his homer in the fourth inning. But the Cardinals tied the game 2-2 in their half of the inning.

Harrison Bader and Paul DeJong followed with singles, then Bader moved to third on a flyout. Wainwright drove in Bader with a safety squeeze bunt to tie the game 2-2.

The Cardinals took a 4-2 lead in the fifth inning against Gustave. Goldschmidt hit a leadoff double and scored when O’Neill’s single to right field bounced past Avisail Garcia.

O’Neill raced to third on the error then scored on Arenado’s sacrifice fly.

Rondon’s pinch homer in the sixth inning pushed the Cardinals’ lead to 5-2 and Arenado’s seventh-inning homer made it 6-2.