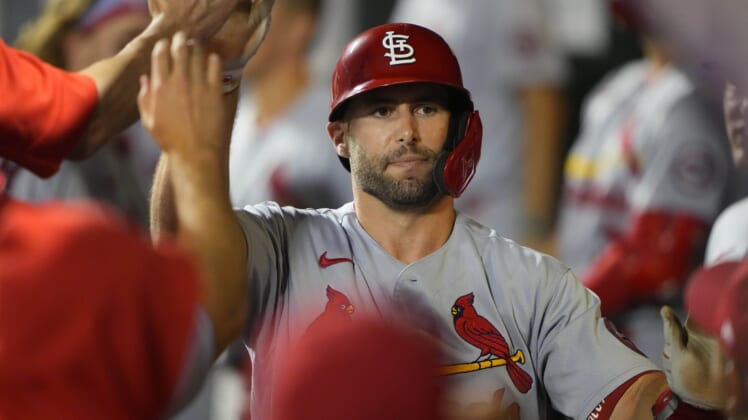 Edmundo Sosa and Harrison Bader added run-scoring singles in the ninth for the Cardinals, who collected 15 hits.

The Cardinals also moved within a half-game of the second wild-card spot shared going into Monday night by the San Diego Padres and Cincinnati Reds. San Diego was visiting the San Francisco Giants later Monday, and the Reds were idle.

Wainwright won his fifth straight start and third in a row since turning 40 on Aug. 30. He rarely threw a pitch above 90 mph and threw 37 curveballs at an average velocity of 73.3 mph.

Wainwright worked out of a bases-loaded jam in the first when he used a 74.8 mph curveball to whiff Jeff McNeil. He used his sinker to induce a double-play grounder from Hill in the second and escaped trouble in the fifth when Goldschmidt snagged Michael Conforto’s sharp liner to first.

According to the Elias Sports Bureau, the matchup between Wainwright and Hill was the first between two pitchers at least 40 years old since R.A. Dickey pitched for the Toronto Blue Jays against Bartolo Colon of the Mets on June 18, 2015.

Elias also said it was the first time a Cardinals player over 40 opposed another pitcher at least 40 years old since Dazzy Vance opposed Cincinnati’s Eppa Rixey on June 18, 1933.

Hill (6-7), who fell to 0-3 in nine appearances with New York after being acquired from Tampa Bay on July 23, allowed three runs on six hits in five innings. He turned 40 in March.

A scary moment occurred in the second when Kevin Pillar reached on an infield single to Sosa at shortstop. After making a lunging grab to field the grounder, Sosa’s wild throw hit first base umpire Junior Valentine in the face near his right ear. Valentine was bleeding but stayed in the game after getting attention by a New York trainer.