Parker White’s tiebreaking 36-yard field goal on the final play was the difference Saturday as South Carolina rallied from a two-touchdown deficit to beat East Carolina 20-17 in Greenville, N.C.

The kick was the senior’s sixth game-winning boot of his career and ended a 54-yard drive in 10 plays.

South Carolina (2-0, 0-0 SEC) quarterback Zeb Noland — a grad assistant who was a feel-good story last week in his return to action for his third school — went 13-of-24 for 189 yards and a TD pass to Dakereon Joyner with one interception.

Josh Vann caught five passes for a game-high 91 yards, Damani Staley scored on an interception and Darius Rush picked off a pass for the Gamecocks, who won their fifth straight against ECU and are 15-5 in the series.

Pirates (0-2, 0-0 AAC) quarterback Holton Ahlers was 11-of-24 for 77 yards and rushed for a touchdown but tossed two interceptions.

Warren Saba recorded an interception and D.J. Ford recovered a fumble that set up a short score. 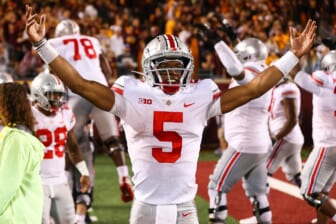 In motion on the first play from scrimmage, wide receiver Tyler Snead took a handoff from Ahlers, went wide and tossed a long pass to an open Jsi Hatfield, who hauled in the catch and ran for a career-long 75-yard reception.

After Jeremy Lewis’ forced fumble was grabbed by Ford in the second quarter, Ahlers called his own number two plays later to put the Pirates up 14-0 at 11:53.

However, the Gamecocks broke through in the half’s last minute by pressuring Ahlers, resulting in linebacker Staley’s interception and 63-yard run to cut the halftime deficit to 14-7.

South Carolina went 72 yards in five plays, ending with Noland’s 13-yard scoring strike to Joyner to tie the game at 14 in the third.