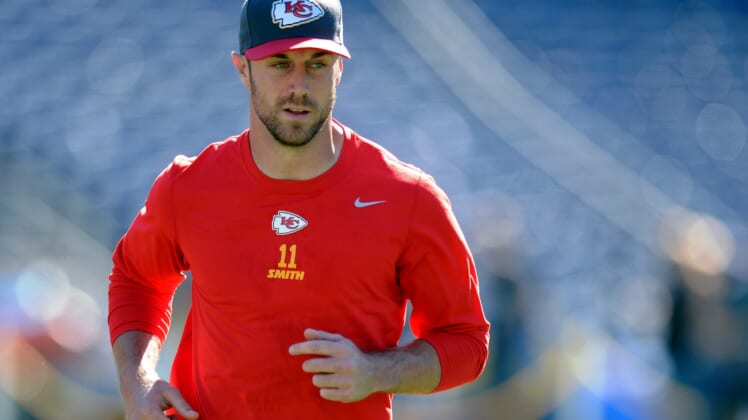 Kansas City Chiefs quarterback Alex Smith is one of the most even-tempered dudes in the NFL. He has been through a ton of adversity and always comes through it with a positive attitude.

It’s very rare that anything bugs Smith. Yet somehow, Andrew Perloff of the Dan Patrick Show managed to get under his skin on Tuesday.

Hard to make Alex Smith mad. But I managed to do it. pic.twitter.com/4nFVqsDKIx

Perloff was setting up to catch some passes from Smith when he quipped, “But it’s not Mahomes. It’s Alex Smith. Shouldn’t I get closer?”

Smith wasn’t truly furious, but the comment definitely raised the stakes of the little exercise. Smith put some serious heat on the passes to Perloff, who was not prepared to handle them. It’s a good thing the windows behind him were sturdy.

Smith could very well be moving on this offseason. Patrick Mahomes is definitely the future for the Chiefs, who paid a king’s ransom in draft capital to move up and draft him last year.

It’s been reported that the Cleveland Browns are going to make a play to trade for Smith, which could be another reason he was feeling extra feisty on Tuesday morning.