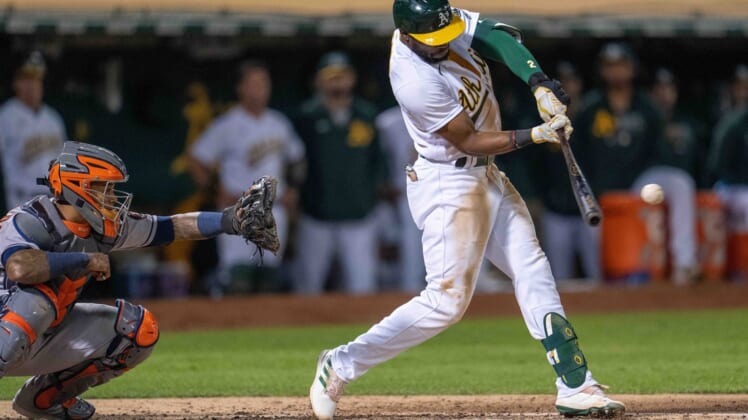 Pinch hitter Chad Pinder broke open a tight game with a seventh-inning grand slam Friday night as the Oakland Athletics staved off formal elimination in the American League West with a 14-2 trouncing of the visiting Houston Astros.

By snapping a four-game losing streak, the A’s (83-71) not only improved to eight games back of the first-place Astros (91-63) with eight to play, but also remained four behind the New York Yankees (87-67) in the battle for the second wild-card spot in the AL.

A second straight loss hurt the Astros’ chances of catching the Tampa Bay Rays (95-59) for the best record in the AL.

The A’s led just 3-2 before exploding for 11 runs on eight hits in the seventh and eighth, scoring more runs in those two innings than they had in their entire four-game sweep at the hands of the Seattle Mariners earlier in the week, when they were outscored 19-10.

Starling Marte capped a four-RBI performance when he doubled home a pair of runs in the seventh and singled in one in the eighth.

Pinder’s grand slam came three batters after Marte’s double in the seventh, turning a 5-2 game into a 9-2 blowout. The slam was the second of his career, the homer his fourth of the season.

Matt Olson, a third member of the A’s that drove in four runs, had a two-RBI double to highlight a five-run eighth.

Frankie Montas (13-9) benefitted from the big-time support, limiting the Astros to two runs and two hits in seven innings. He walked three and struck out eight.

One of the two hits off Montas was a solo home run by Jose Altuve, his 30th, which gave Houston a 2-0 lead in the third. The seven-time All-Star moved within one of his career high for homers, which he set in 2019.

Starter Brandon Bielak (3-4) took the loss despite allowing just three of Oakland’s 14 runs. They came on four hits in the first three innings, during which he walked two and struck out three.

Altuve’s homer was the only extra-base hit for the Astros, who have gone 9-5 against the A’s this season.