Timo Meier scored a power-play goal at 1:07 of overtime and the undermanned San Jose Sharks defeated the visiting Winnipeg Jets 2-1 on Saturday.

With a 4-on-3 advantage after Nikolaj Ehlers was called for interference, Meier scored from the right circle on a one-timer off a pass from Kevin Labanc.

Winnipeg’s Kyle Connor forced overtime with a goal at 16:48 of the third period.

The Sharks were without seven players and coach Bob Boughner, all of whom were placed in the COVID-19 protocol on Saturday. In addition, Logan Couture was out due to a non-COVID illness. The Sharks recalled five players from San Jose of the American Hockey League and assistant John MacLean coached the team.

Tomas Hertl scored San Jose’s first goal and James Reimer made 34 saves for the Sharks, who had lost three straight. Meier also had an assist.

Connor Hellebuyck made 34 saves for the Jets, who saw their four-game winning streak end.

The Sharks took a 1-0 lead 54 seconds into the second period. 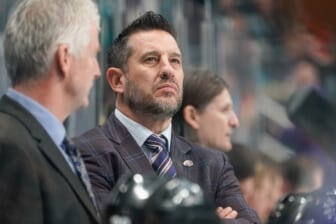 Alexander Barabanov entered the zone along the right wall, skated to the end line, spun and centered the puck. It deflected to Hertl on the opposite side of Hellebuyck, and he knocked it in for his third goal of the season.

Reimer made a nice blocker save on Connor’s wrist shot from the right circle with 8:06 remaining in the third period, bug the Jets tied it at 16:48. Pierre-Luc Dubois carried into the zone and dropped the puck back to Ehlers in the slot. Reimer made the save on Ehlers, but Connor put the rebound in for his seventh goal of the season.